We have been hearing rumors that LG are going to be releasing a new version of their Optimus G Android smartphone, and now it would appear that the handset will be called the LG Optimus G Pro, and we have the full specifications for the device.

The guys over at Engadget have received a slide which shows the new Optimus G Pro smartphone, along with a list of the devices full specifications, which include a 5 inch full HD display. 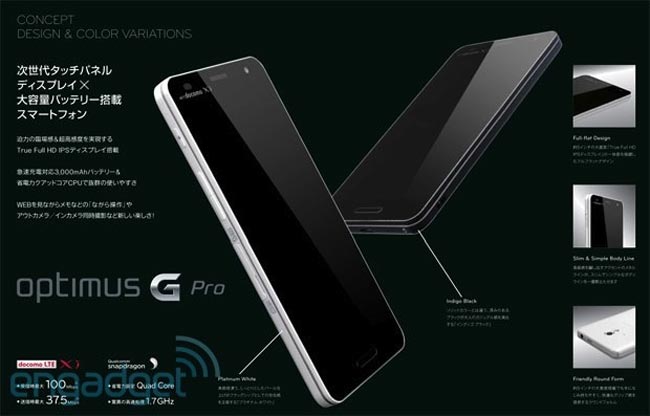 The LG Optimus G Pro will come with a 5 inch display with a resolution of 1920 x 1080 pixels, the handset will be powered by a Qualcomm Snapdragon S4 Pro processor which is clocked at 1.7GHz.

Other specifications on the LG Optimus G Pro include 2GB of RAM and 32GB of built in storage, there will also be LTE and a 3,000 mAh battery, plus Android Jelly Bean and dual cameras.

There are no details as yet on whether LG will be releasing an international version of the Optimus G Pro in the US and Europe, as soon as we get some more information we will let you guys know.