We just showed you some photos of Google’s next Nexus smartphone, the LG Nexus 4,which we are expecting to be officially announced on the 29th of October, and now the device has turned up on a major UK mobile phone retailers website.

The UK’s Carphone Warehouse, have listed the LG Nexus 4 on their website, along with some specifications which include a Snapdragon s4 processor, a 4.7inch LCD display and Android 4.2, although it is called Jelly Bean on the listing, and not Key Lime Pie as we had thought. 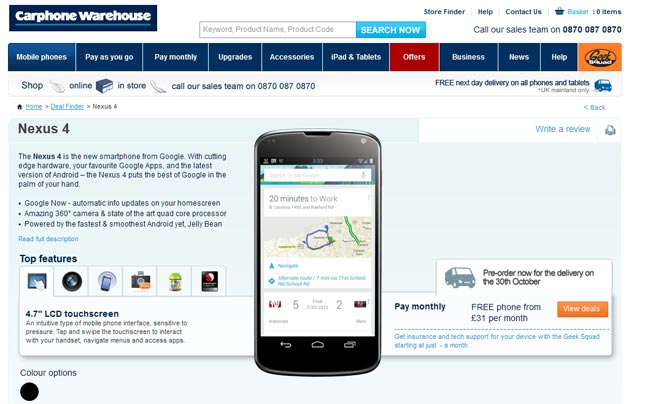 Other specifications listed on their website include NFC, an 8 megapixel rear camera and a front facing camera for video chat, you can see the details over at the Carphone Warehouse.

We have no idea if these details that the retailer have posted are correct or not, but they seem to tie in with the rumors we have been hearing over the last few weeks.