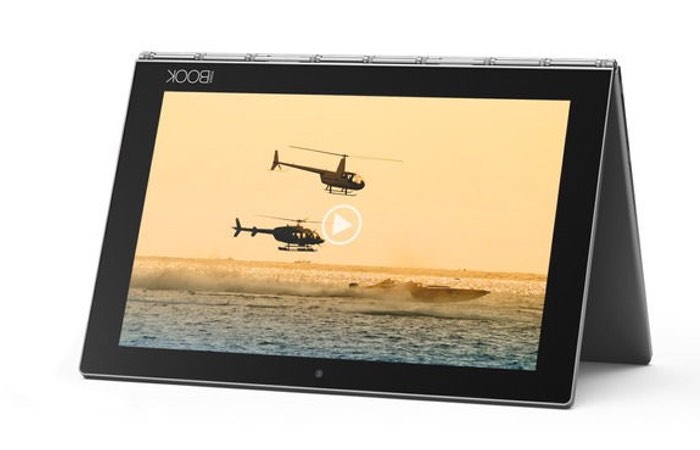 Even though the new Lenovo Yoga Book has not as yet been officially launched by Lenovo, more details about the system have been leaked this week thanks to information that has been published over on the Reddot award website providing a little more insight into the functionality and features of the new portable convertible notebook.

The Lenovo Yoga Book features a 360 degree hinge that allows the notebook to transform from a laptop into a tablet when required, following the screen to be folded around on to the back of the keyboard.

The Yoga Book is powered by an Intel Atom x5-Z8500 Cherry Trail processor that is supported by 4GB of RAM and the system includes 32GB of internal storage. The laptop also includes connectivity via Bluetooth, Wi-Fi, GPS and also has options for cellular connectivity if required. The 10 inch screen on the convertible notebook measures 10 inches across diagonally and provides users with a resolution of 1920 x 1200 pixels.

The Lenovo Yoga Book is expected to be launched in the coming weeks although no pricing details have been leaked as yet. As soon as more specifications, worldwide availability and pricing is announced by Lenovo we will keep you updated as always. The Reddot Award website writes:

YOGA Book is a creative device that belongs to YOGA family. It can be used as a tablet and notebook, which will be adaptable to different scenarios. Thanks to its innovative 3 axis hinge, YOGA Book allows the user to flip around 360 degrees and features a total thickness of 9.6 mm.

It results in a very slim, flexible and portable device that will fit the needs of demanding users. The smart floating keyboard appears when needed, and disappears when the user wants to write , sketch with the intellipen, mixing traditional ink with digital technology. To support heavy journey, long load of work without any plug, the device can stand on its battery for more than 15 hours and be charged in a very short time, allowing the user to focus on its work and mind not on his remaining time.