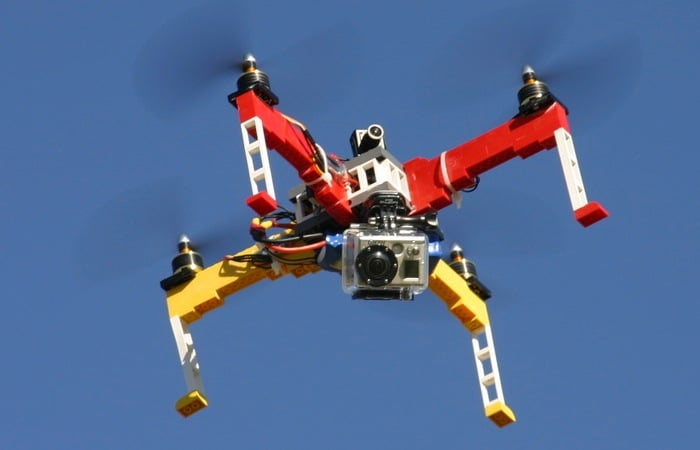 Lego fans that enjoy building constructions using the iconic bricks might be interested in this new Lego drone kit, which is launched over on the Kickstarter crowd funding website this week.

The Lego drone kits can provide just the mechanics for you to provide the Lego bricks or can be purchased as a complete drone kit which includes all the Lego bricks and assembly instructions.

The lightweight Lego drone once glued together and fitted with all the relevant rotors and control mechanisms is powerful enough to be able to lift a GoPro action camera. Enabling you to record your in-flight footage for viewing once the drone has returned to home. Check out the video below to learn more about this unique Lego drone. Its creators explain a little more:

“This story began in 2012. This is when the world’s first flyable and fully autonomous quadcopter frame made completely from LEGO bricks was created by Software Developer and Designer, Ed Scott. Along with his kids, Ed’s design took it’s flight in December of 2012. The frame was made entirely from LEGO bricks and glue, nothing more, to make it fly the electronics were off the shelf hobby components.

In 2013 Ed made it a fully autonomous robot using the 3DR APM flight controller, Ed was the first to make a truly autonomous quadcopter made from LEGO bricks. The project was not only beyond fun, it was extremely educational for the kids and the entire family. So now we want everyone to have the opportunity to build their own drone with LEGO bricks.

Ed Scott has teamed with Nick Margarone who is an expert at 3D printing and a battery engineer. Nick is an avid multicopter flyer himself who has built his own custom models from carbon fiber and other materials. Together they want to bring you, in different packages, everything you need to make a drone made from LEGO bricks and fly it on your own.”

The Lego drone project is currently over on the Kickstarter crowd funding website looking to raise just $200 in pledges to make the jump into production. So if you think a Lego drone is something you would like to build, visit the Kickstarter website now to make a pledge and help the Lego drone become a reality.