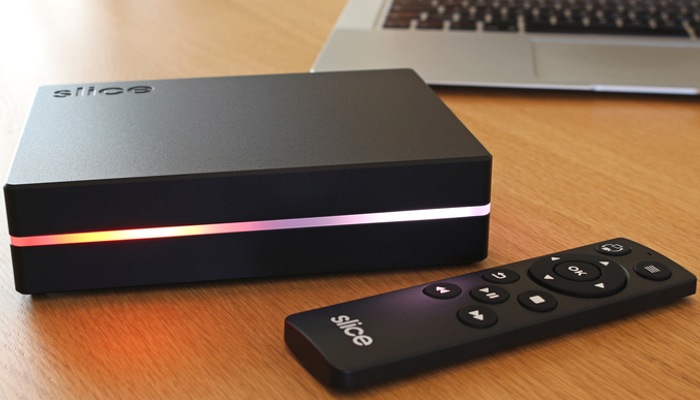 The new Raspberry Pi computer module was first unveiled by the Raspberry Foundation in April of this year and was followed up with the release of the Compute Module Development Kit in the middle of June.

Now manufactures are starting to us the awesome new Raspberry Pi computer module in projects such as the OTTO point-and-shoot camera which has launched over on the Kickstarter crowd funding website, and now the Slice is an XBMC media player.

The Slice media player is powered by a Raspberry Pi computer module and is housed in a custom case with a ring of 25 RGB LEDS to add effect around the centre. The Slice Raspberry Pi media centre has been developed by Mo Volans, Paul Beech, Jon Williamson, Gordon Hollingworth and James Adams and just launched over on the Kickstarter crowd funding website looking to raise £90,000 in go into production.

“A key design goal for Slice was ease of use and we’ve worked hard to build simplicity into both the software and hardware without compromising on features.

Slice runs the popular open source media player software XBMC. XBMC is stable, full-featured and under constant development and improvement within the community. XBMC can also automatically add information and box art to your media files if connected to the internet.

Although XBMC is a superb package its default user interface has many options and is complicated for those who aren’t familiar with it. We have created a new, simple and elegant user interface (or skin) for Slice that runs on top of the core XBMC software.

Different themes can be chosen within our skin to vary the colour scheme and backgrounds. Whichever theme you use the basic layout of the software will never change making navigation simple and intuitive. “

– Connects to your TV via HDMI and will store and play back all of your videos, music and pictures in full HD.
– Has a carefully designed user interface and custom remote control that makes it effortless and fun to use.
– Has an anodised case machined from solid aluminium.
– Features a unique, customisable LED light ring for visual feedback and wow factor!
– Has on-board storage – simply drag and drop your media onto Slice’s hard disk using a single USB connection from any Mac or Windows PC.
– Small and portable – take your media with you to enjoy with friends, family or on trips away.
– Can access media over a network, and has 2 USB ports for connecting extra devices, such as external hard drives.
– Built on open technologies and can be reprogrammed to run alternative open source software.

So if you think the Slice media Player is something you could benefit from, visit the Kickstarter website now to make a pledge and help the Slice Raspberry Pi media Player become a reality.