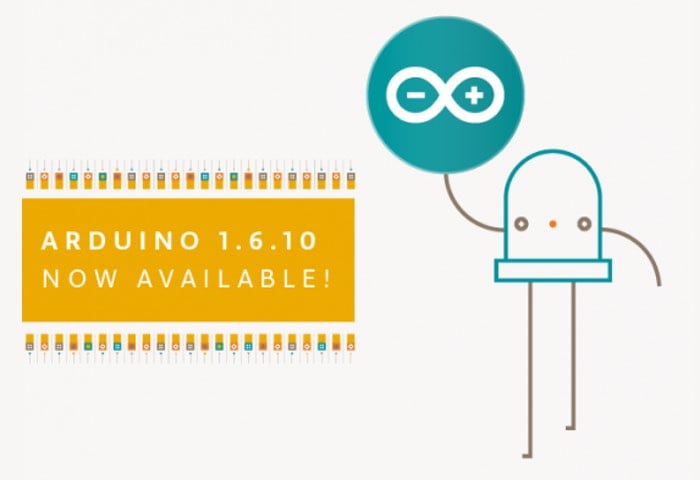 Arduino has today announced via the official Arduino blog that the latest Arduino IDE 1.6.10, AVR core 1.6.12 and SAM core 1.6.9 have now been released and are now available to download.

The latest release of the Arduino IDE includes an up-to-date toolchain for AVR containing the latest goodies from Atmel, GCC and AVRDUDE developers explains Arduino. Together with Link Time Optimization (LTO) which allows users to make their sketches smaller and faster with a simple press of a button.

The official Arduino blog explains a little more about the features you can expect to enjoy in the latest Arduino IDE release :

The AVRDUDE update brings out-of-the-box support for a wide range of microcontrollers and debuggers, making it is as simple as possible to deploy. (For example, problems with Gatekeeper on Mac and dependencies on Linux are a thing of the past.)

Likewise, the builder has received the love it deserves and some of its shortcomings are gone forever. You’ll never have to worry again about encountering weird errors if you need to use C++ advanced libraries.All these improvements have been shared with Arduino Create, our cloud-based IDE. Check it out if you’ve never tried it, or test out these enhancements if you’re already an active user! 😉

Of course, we also fixed some corner cases for user experience, so now we have a better error reporting when the upload fails and a [nicer] way to include libraries containing lots of header files.What’s more, we have gone ahead and developed a new firmware and certificate updater for MKR1000 / WiFi101 Shield users–it’s bundled with the IDE and available as a plugin for older installations.

For more information on the new Arduino IDE jump over to the official Arduino Blog website for details by following the link below.