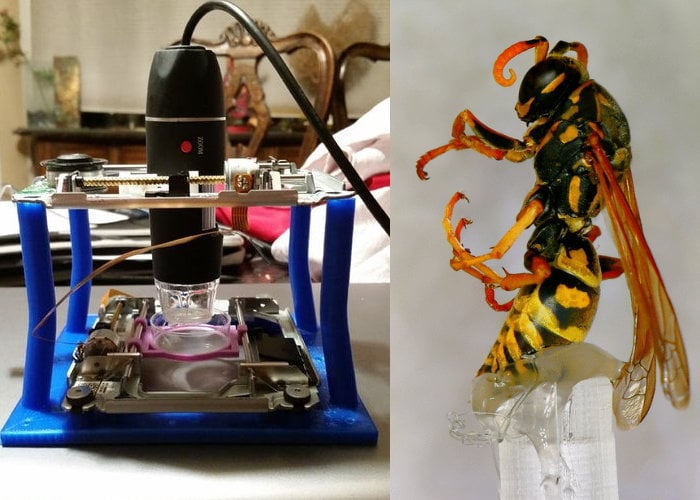 Using parts from Blu-ray players combined with a few 3D printed components Instructables member “ Noselace” has created a fantastic miniature microscope and 3D scanner which can be seen in action in the video below. The miniature microscope has been aptly named the LadyBug and has been built to take photographs of small objects from all sides. The photographs can then be used to create 3D models of small subjects such as insects offering an affordable and effective way to transform smaller objects into 3D models. For examples of the 3D imagery at work jump over to the official Instructables project page for examples of 360° images, constructed using lots of smaller “sub-images” stitched together.

“LadyBug is a picture-based 3D scanner, meaning that it’s primary function is to take photographs of an object from all sides, which can then be turned into a 3D model. What’s special about it is what it takes the pictures with, how it takes the pictures, and what it’s made of. First, it uses a high-powered USB microscope, which is both cheap and effective — as long as you’re just looking at a tiny part of the object!

LadyBug solves this by using motors to do 3D scanning on top of 2D scanning! The images you see above were actually stitched together from many sub-images. You’ll see a lot more bugs throughout the guide; they make great subjects for the scanner because they are the right size, are easily found for free and dead, and of course have lots of really interesting colors and geometry.”

For more information on the microscope and 3D scanner built from Blu-Ray players and 3D printed parts jump over to the official Instructables project page by following the link below.