Honestly, don’t know if the Kuratas robot is real or fake. All I know is I want one. This massive robot is about 13 feet tall and is big enough for a human pilot to ride inside. The bot can be controlled remotely according to the video using an iPhone and external controls. 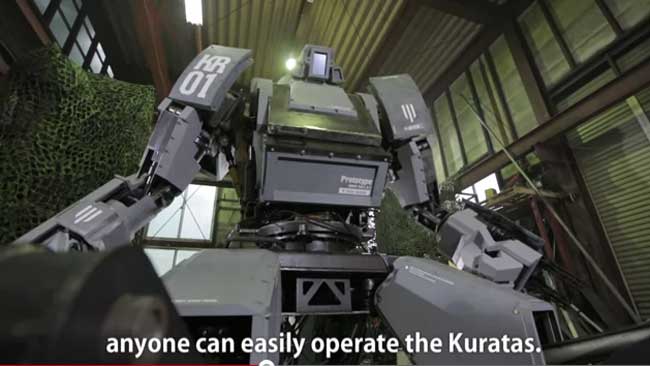 This is supposed to be a real robot that can be customized with different “weapons” and paint schemes. The bot reportedly will sell for over $1 million when the project is finished. The video shows twin BB shooting Gatling guns and a missile launcher that appears to shoot water bottles.

The robot is supposed to stand 4000 mm tall and about 3000 mm wide with the leaked of roughly 4000 mm. The weight is supposed to be 4500 kg. The robot has a humanoid torso, two arms, and head, but rather than legs it has four wheels to scoot around and is powered by a diesel engine.