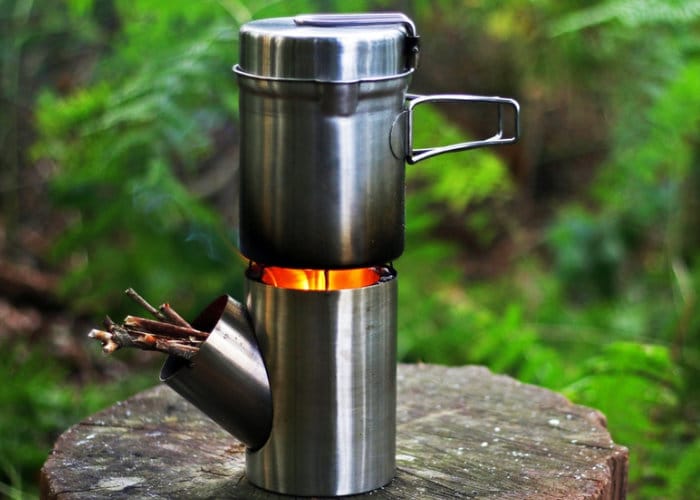 Campers, adventurers or anyone else looking for a portable, lightweight cooking set may be interested in a new piece of kit created by Arnaud, called the Kombuis. Which takes the form of a portable, compact and efficient rocket stove set that offers a wood stove and a small pot and pan constructed from magnesium alloy. Watch the demonstration video below to learn more about the Kombuis rocket stove which is launched via Kickstarter this week to raise the €30,000 required to make the jump into production.

The stove has been designed to function naturally and requires no batteries or fans and relies on airflow which is generated and pushed under the burning wood, so the fire burns hotter as more oxygen is sucked in. Because of the insulation in the wall of the rocket stove, hot air is channelled out of the top of the stove making for a more efficient cooking process and requiring only a small amount of fuel.

Fuel for the rocket stove is simply small sticks, twigs and other biofuels you find in nature which is then loaded into the 45 angle loading hopper on the side of the central convection tube. The rocket stove is now available to back from just €75 with worldwide shipping expected to take place during July 2018, If the Kickstarter campaign is successful. For more details and a full list of all available pledges jump over to the official Kombuis campaign page by following the link below.