Kodak has just unveiled their new range of cameras and camcorders at CES, the Easyshare Touch, Mini and Sport Cameras together with their Playfull and Playsport Camcorders.

The new Kodak Playfull camcorder, has an ultraslim design with a 1080p capture mode together with a share feature. By simply pressing the “share” button on the front you can upload your video directly to YouTube or a social network and will retail for around $150

Kodak is also launching their next generation of its Playsport video camera at CES,  these are designed to be waterproof in up to ten feet of water, shockproof, dustproof and capable of recording video at 1080p together with five megapixels still images, it also has a share button and will retail for around $180. 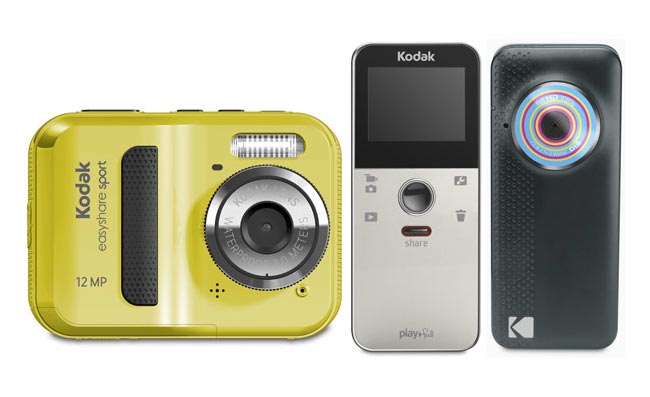 The new Kodak Easyshare Touch camera is equipped with a three-inch capacitive touchpanel, a dedicated video record button, a 14 megapixel sensor, 5x Schneider-Kreuznach lens and an HDMI output and will be retailing around $150.

Easyshare Mini camera, described as Kodak’s smallest camera, is approximately the size of a credit card and is equipped with a 3x wide-angle optical zoom lens, a built-in front mirror for easy self portraits, a ten megapixel sensor and a 2.5-inch rear LCD for $100

Finally the Easyshare Sport camera, which is Kodak’s first waterproof camera that can go up to ten feet underwater and is also protected from dirt and dust. Its equipped with a 12 megapixel sensor and 2.4-inch LCD display, retailing for around $80