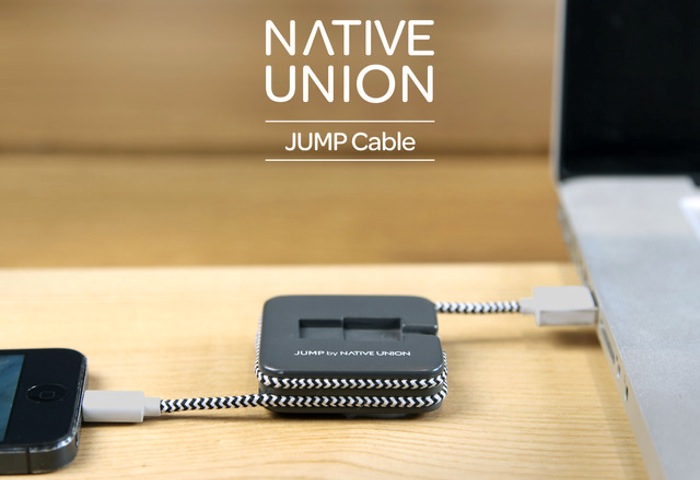 After a successful Kickstarter crowd funding campaign which enabled Native Union the inventors of the Jump Cable pocket battery to raise more than ten times what they required to make the move from concept into production.

Those of you that were not lucky enough to catch the Kickstarter campaign will be pleased to know that the Jump Cable and pocket battery charger is now available to purchase at just under £40 or $50 in both the UK and US.

The Jump Cable and pocket battery is available for both the latest generation iOS smartphones and also Android mobiles equipped with a microUSB power connections.

Unlike power banks the Jump Cable charges itself whilst automatically charging your smartphone. Watch the video below to learn more about the Jump Cable pocket battery and see it in action.

The Jump Cable is capable of providing users with up to 3 hrs of extra talk time and is fitted with a 800mAh rechargeable lithium-polymer battery and is capable of adding an extra 30 percent to an Apple iPhone 5 device.

Specs include a pass-through charging output: Up to 2.4A, discharge output current: 1A and offers a standby of upto 70 hours. For more information on the new Jump Cable jump over to the Native Union website for details.