Indie games are rarely subtle. We don’t mean gameplay, of course, they’re all kinds of subtle when it comes to subverting gameplay conventions, tackling a player’s frail psyche and anything else you can imagine that can be stretched and ratcheted onto a framework of mechanics. We meant something a lot more trivial than that – the graphics. Indie games are rarely subtle when it comes to what they throw onto your retina. 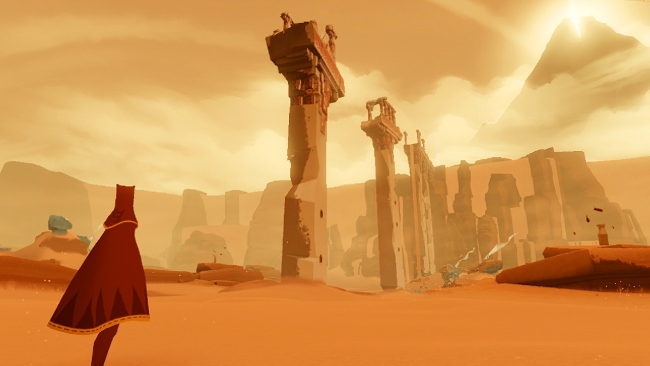 Journey’s art direction is arresting in ways that the Bayonettas and Final Fantasies of the world wish they could be. The enigmatic protagonist’s red, silken full body… costume shall we say billowing while he/she/it makes its way over constantly shifting sands is as delicately and lovingly animated as anything we’ve seen in the interactive medium to date. Not to mention it takes some artistic gumption to juxtapose bright primary colours while maintaining a haunting and dignified atmosphere, which Journey does effortlessly. And if only we could stop here, Journey could be a magnificent painting we were lucky enough to be able towalk around in and all would be well. Unfortunately, people have this annoying habit of playing games instead of watching them in hushed and reverent tones. And if in its quest to be meaningful, Journey had only forgotten to be fun, that would have been fine. That’s something anyone playing indie games has grown accustomed to overlooking a while ago. On one condition: that the gameplay is interesting.

And while walking on huge swathes of sack cloth to imbue them with colour and coax them into flying up to form a bridge between pillars jutting from the fallow landscape may sound and look like a worthwhile endeavour, fighting the controls to do so is not, however much we sincerely hope that at one point it will be. As it stands, beautiful as it is, Journey seems to have turned the indie ethos on its head.