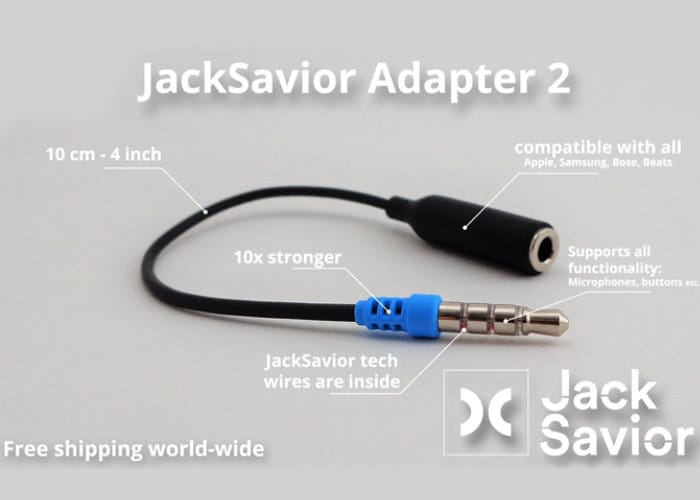 Headphone cable connections can take quite a battering on a daily use. If you haven’t made the jump to Bluetooth or prefer a wired connection for superior audio quality, you may be interested in a new super strong audio jack aptly named the JackSavior. “We solve headphone jack plug failure by making it flexible and 10x stronger.” Watch the demonstration video below to learn more about the construction of the second generation JackSavior 3.5mm adapter which is being marketed as the world’s strongest and smallest audio jack.

Using JackSavior your headphone jack and cable connection take less strain and hence less damage. “The JackSavior plug is an audio jack where the wires are connected inside the plug resulting in a smaller, flexible and 10x stronger audio jack. This prevents any external forces from touching the connection, preventing jack, plug, and ultimately, headphone failure. In blue with white cable the JackSavior plug:”

JackSavior has this week launched via Kickstarter and is now available from just €5 or £5 and is 10 cm in length allowing you to connect your favourite headphones without worrying about the cable connection deteriorating in your pocket or bag. Jump over to Kickstarter for a full list of all available pledges and more details on the construction of the JackSavior adapter.