According to the guys over at Ars Technica and Macenstein, Apple will be releasing another firmware update to the iPhone when it releases the SDK later this month. 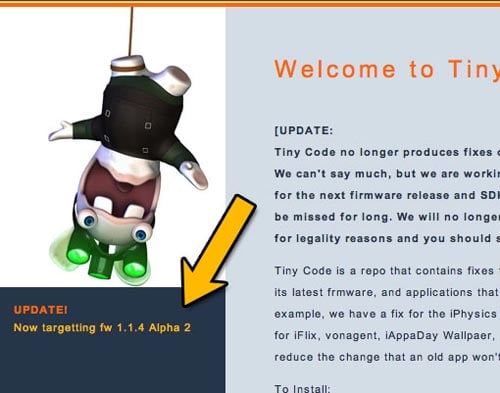 Once the iPhone 1.1.3 firmware was released last month, iPhone speculators and unlockers quickly turned their attention to the SDK. We’ve heard a lot about what the SDK might contain and when it may be arriving, but a different sort of rumor is now making the rounds. According to Macenstein, a message on the website of iPhone developer Tiny Code hints at the arrival of the 1.1.4 firmware, possibly coinciding with the SDK release.

Tiny Code’s site is now down, but the original message stated that the company has stopped work on its 1.1.3 applications, and is now working with Apple “for the next firmware release and SDK applications.” Throw in a separate mention that Tiny Code is now working on firmware 1.1.4 alpha 2, and all signs seem to point to another firmware release sometime in the next few weeks.

A likely possibility is that Apple will release the 1.1.4 firmware at the same time as the SDK (or very close to the SDK release), since SDK-created applications may well need 1.1.4 to run. On the other hand, the mention of 1.1.4 as an alpha could mean that the firmware release will come a week or two later, once developers have starting churning out content. Either way, jailbreakers and unlockers may have another update to contend with far sooner than expected.

I can’t wait till the SDK comes out, I have been waiting for its release before deciding whether or not to unlock my iPhone, I am happy with the provider O2, but would like some of the cool apps that unlocked iPhone users benefit from.

There are certain things I am hoping will be released in the next update, the main one is Flash support, so many of the websites that I use on a daily basis use flash, I guess we will just have to wait and see.