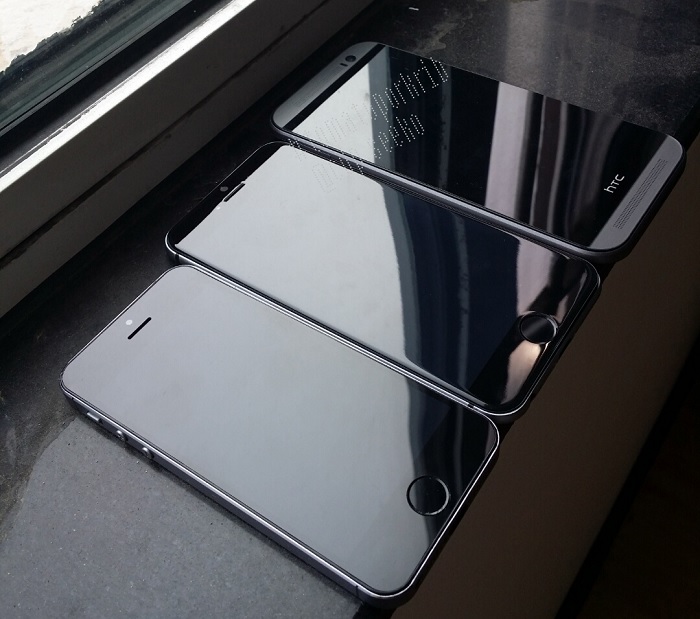 There’s not even a single day when we don’t see any rumor related to the upcoming iPhone 6. The last one said that iPhone 6 is expected to come with a QHD display, sporting a higher resolution compared to the current iPhone 5.

The above picture shows the iPhone 5S and HTC One M8, comparing the size of the device. There’s no word if its a dummy unit or a real device, but whatever it may be, it gives us the same thing we’ve seen in the past few weeks, that is, the screen size. Apple is rumored to working on two new iPhone 6 models with a larger display, possibly 4.7-inch and 5.5-inch.

It’s not just the above one, a number of other photos of the purported device have made its way to the blogosphere, showing the device from all possible angles. The device shown in the photoshoot comes with a rounded design, similar to what we’ve seen in the past few weeks. Interestingly, the Apple logo is still missing from the device, so we’re assuming it may be a dummy unit.

The upcoming iPhone 6 is said to come with an A8 processor, as well as a larger display with better resolution, and an improved camera. Fingerprint sensor is also said to make its way to the device, with iOS 8 as its operating system. Rumors suggest Apple will release both devices by September later this year. Anyway, here are some more images of the alleged device.

We’ll update you as soon as we get more information about the upcoming Apple flagship.