I have only been using my new iPhone 4S for a couple of days now but I have already noticed a difference in the battery usage compared to that of my older iPhone 4. But the team over at iLounge have used the weekend to put both the iPhone 4 and iPhone 4S in a head-to-head battle to see how their battery life compares to each other,  in certain circumstances.

In Apple’s official specifications, they claim that their new iPhone 4S has an improved talk time over the old iPhone 4 but worse standby time. As you can see from the statistics below iLounge show that the iPhone 4S lives up to Apple’s claims in the voice department, but doesn’t last as long as the iPhone 4 when using 3G data. But remember the new iPhone 4S has a dual core processor rather than a single. 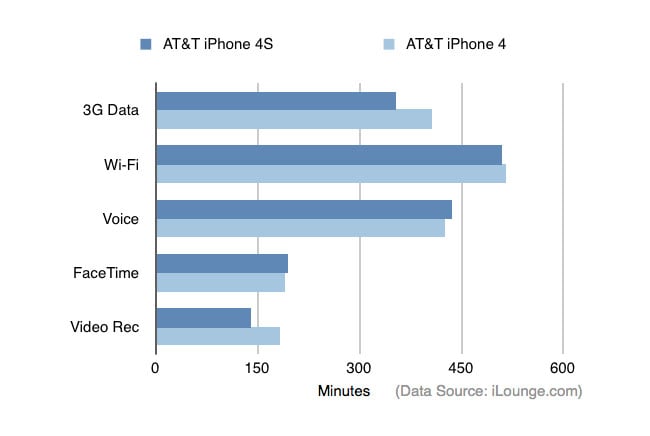 If you spend much of your day near a Wi-Fi network and only rely upon the iPhone 4S for web browsing and phone calling, you won’t notice a major difference—unless you’re thinking of switching to Sprint, in which case we’d be a little concerned. Similarly, if you use 3G data, plan to record or play videos, or want to listen to hours of audio during the day, you can expect greater battery drain from the iPhone 4S.

If you have been noticing a dramatic difference in the battery life of your new iPhone 4S. It might be worth calibrating the battery by draining it entirely and then charging into full a couple of times. This will help calibrate the battery gauge and the juice remaining in your battery.

Read the full battery comparison review over on the  iLounge website.