JamUp Pro XT and AirTurn are claiming a worlds first this week with the unveiling of their new iOS Guitar/Bass Multi-FX System which is equipped with a with a wireless foot switch.

The new iOS Guitar/Bass Multi-FX System has been announced ahead of NAMM the National Association of Music Merchants exhibition which starts tomorrow, where is will be showcased. Watch the video after the jump to see it in action. 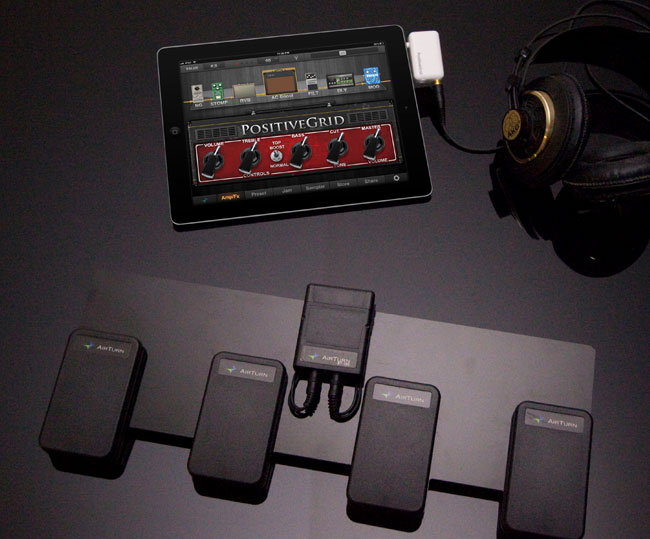 “JamUp Pro XT users will be able to use AirTurn’s two or four pedal BT-105 Bluetooth controllers to switch between dozens of studio-grade amp and stomp box effects hands-free. Each AirTurn pedal can be customized within JamUp Pro XT to perform various functions, from toggling amps and effect switches, to moving between presets, controlling Jam Player’s iTunes song playback functions, triggering various sampler recording and dubbing options, and even controlling the built-in metronome or tapping out the tempo, wireless and hands-free.

The AirTurn BT-105 features a built-in rechargeable battery that provides power for up to 100 hours of continuous use and works with all models of the iPad, as well as with the iPhone 3GS and up and the iPod Touch. In addition to AirTurn’s two and four pedal boards which are outfitted with their own ATFS-2 silent pedals, the AirTurn BT-105 can be configured to work with a wide range of momentary normally open (NO) switches, such as the Boss FS-5U and the Boss FS-6 dual foot switch.”