After months of testing, Apple seeded the latest iOS 7.1 yesterday which comes with a bunch of new features such as CarPlay, Siri and Touch ID improvements and more.

There’s more to the latest iOS 7.1 then just new features and improvements. According to a new report from 9to5Mac who managed to digg a little deeper inside the iOS 7.1 build, there are two new iPad models listed as well, namely iPad (4,3) and iPad (4,6). 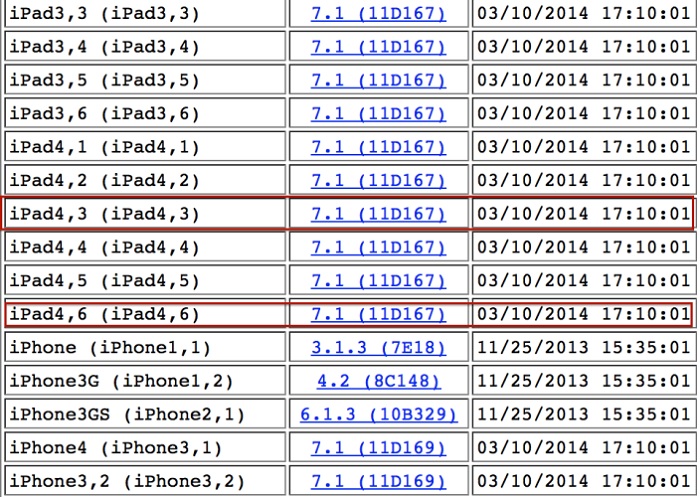 It seems the latest iOS 7.1 apparently supports two new iPad models as well. But, what could they be? Some new iPads? Well, before you get too excited about their existence, you should know thatApple has not announced these two new models, but they appear to be just minor hardware revisions of the tablet or tablets intended for the use of international markets.

For those of you who need more information, iPad Air has model numbers iPad 4,1 and 4,2, while the iPad Mini with Retina display has iPad 4,4 and iPad 4,5. So, these two new models could be tied to a carrier in any other market as suggested. Additionally, they also report that Apple makes rare, unannounced changes to the hardware of its products with improved or efficient components.

What do you think about this? Will we see new iPads nearly six months after the launch of iPad Air? I don’t think so.