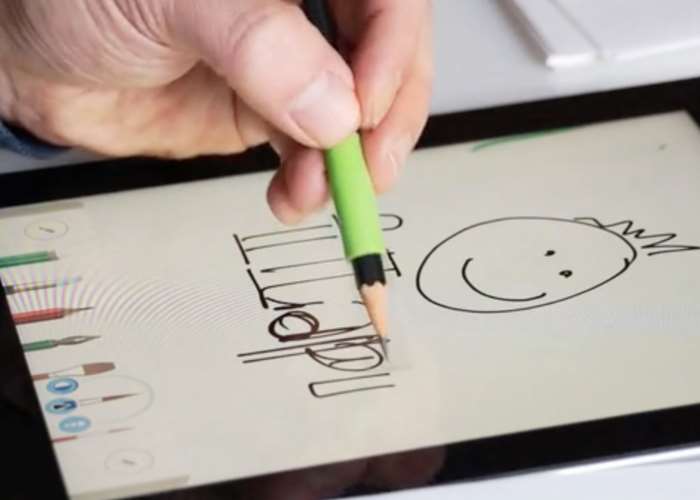 Tablet users still searching for their perfect stylus might be interested in a new capacitive pencil stylus which has been created by a development team based in Italy.

iLapis As a little more unique than most capacitive stylus on the market as it takes the form of a pencil which can also be used to sketch, write and take notes on normal standard paper-based products.

Watch the video below to learn more about this unique capacitive stylus which is taken to Kickstarter this week to raise the required €33,000 the team require to make the jump into production.

DO YOU THINK IT’S POSSIBLE?

• Is it possible to write and draw with a normal pencil on your tablet (iPad o Android)?
• The answer is YES! with ILapis…
• iLapis is a simple add-on that transforms any standard pencil in a precise capacitive stylus for touch screen;
• iLapis is simple and light;
• It gives the same natural feelings of traditional drawing and writing;
• iLapis is the only capacitive pencil;
• Is the only stylus working on paper and touch-screen with the same tip and that you can erase!
• Unlike most of other styluses, iLapis works excellently smoothly even at minimum pressure on the screen and at extreme inclinations, features that make it excellent as a surprising unobstructive capacitive pointer stick!
• You can handle your pencil however you want, iLapis will work perfectly.
• You can use iLapis wherever you want: indoor et outside, at school, in the train, on the beach ect. It can be used safety by children to learn writing (with dedicated apps), for professional use (art or handriting), or for ordinary use to tap and swipe quickly;
• It’s cheap and resistant. If you loose, wet, break, dirty it or simply falls to the ground, you won’t waste lots of money.
• Unlike any other precision stylus, iLapis does not need batteries, wifi of bluetooth or microchip to work, just the power of the graphite!