Apple is celebrating the 30th anniversary of the Mac, a machine that has revolutionized its market, but the folks at iFixit went back in time to teardown the original 128K Mac released almost three decades ago.

The Machintosh 128k went on sale in 1984, and retailed at a whopping  $2,495 — almost $5,594 in today’s world after adjusting it for inflation. The folks at iFixit disassembled the historic machine and gave it a repairability score of 7 out of 10, with 10 being the easiest to repair. 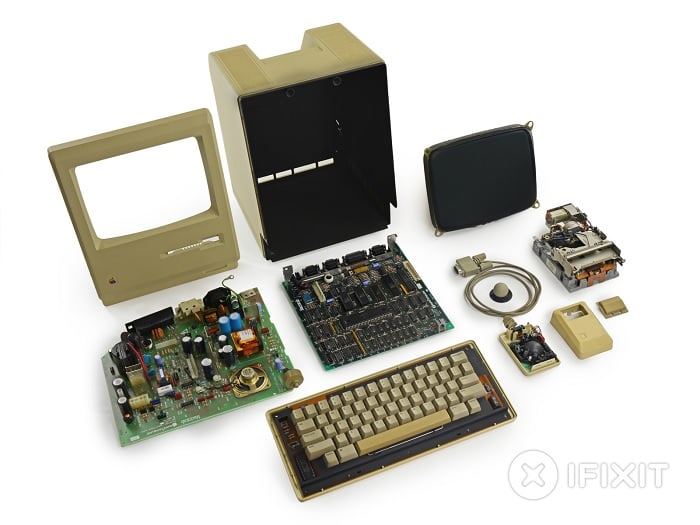 According to the folks at iFixit, the machine comes with 8 MHz Motorola 68000 processor, 128 KB DRAM, 9″ black-and-white CRT display running at 512 x 342 pixels (72 dpi), 400 KB total storage via a single-sided 3.5-inch floppy disk drive, Single-button mouse and hefty keyboard. These specification may not impress you, but I think it might mean something at the time when it went on sale back in 1984 — it’s actually older than me so I can’t be sure if the price Apple was asking at that time was reasonable or not.

Based on the score, it seems its pretty easy to repair, but there are a few difficult things they came across during the teardown. According to the folks at iFixit, the case is fairly difficult to open. Additionally, the RAM is soldered to the logic board and can’t be replaced, and there’s no way to add an internal drive. Although users can use a floppy drive as a means of additional external storage.

I’m pretty confused if the score is based on the current era or the time when the machine went on sale. What do you think?