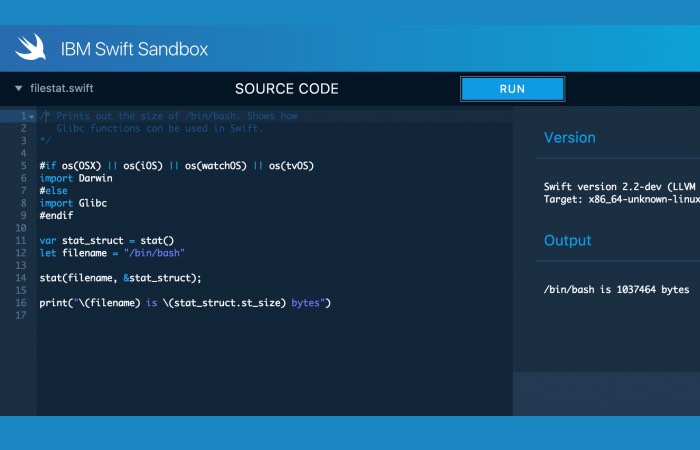 John Petitto an IBM Swift developer who is located at IBM’s Mobile Innovation Lab in Austin, has taken to the IBM developer website to introduce a new online IBM Swift Sandbox that has been made available to anyone who is interested.

The new IBM Swift Sandbox provides an interactive website that enables developers and those interested in learning the new Apple Swift programming language and area to write Swift code and execute it in a server environment.

The IBM Swift Sandbox has been written on the top of Linux and each sandbox runs on IBM Cloud in a Docker container and offers both the latest versions of Swift and its standard library for users to enjoy. IBM explains more :

We’ve provided a collection of sample programs for you to experiment with. Click Source Samples in the upper left corner to see the list of available sample programs. For instance, select filestat.swift and run the program. With the movement of Swift to open source, we’re opening the doors on what we are working on at IBM with Swift. The IBM Swift Sandbox barely scratches the surface of what’s possible. To stay up to date with the open source efforts around Swift.

For more information on the new IBM Swift Sandbox jump over to the official IBM developer website for details via the link below.