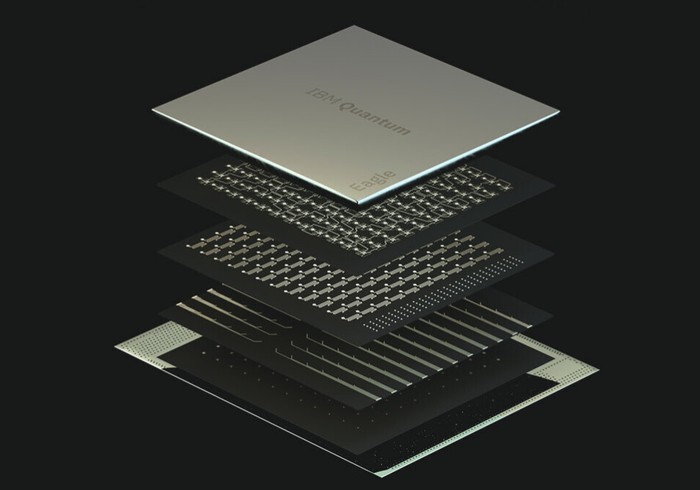 The new IBM 127-quantum bit (qubit) ‘Eagle’ processor has been unveiled this week during the annual IBM Quantum Summit 2021. The ‘Eagle’ processor is a breakthrough in tapping into the massive computing potential of devices based on quantum physics explains IBM. “Quantum computing taps into the fundamental quantum nature of matter at subatomic levels to offer the possibility of vastly increased computing power. The fundamental computational unit of quantum computing is the quantum circuit, an arrangement of qubits into quantum gates and measurements. The more qubits a quantum processor possesses, the more complex and valuable the quantum circuits that it can run.”

“‘Eagle’ is IBM’s first quantum processor developed and deployed to contain more than 100 operational and connected qubits. It follows IBM’s 65-qubit ‘Hummingbird’ processor unveiled in 2020 and the 27-qubit ‘Falcon’ processor unveiled in 2019. To achieve this breakthrough, IBM researchers built on innovations pioneered within its existing quantum processors, such as a qubit arrangement design to reduce errors and an architecture to reduce the number of necessary components. The new techniques leveraged within Eagle place control wiring on multiple physical levels within the processor while keeping the qubits on a single layer, which enables a significant increase in qubits.”

“The arrival of the ‘Eagle’ processor is a major step towards the day when quantum computers can outperform classical computers for useful applications,” said Dr. Darío Gil, Senior Vice President, IBM and Director of Research. “Quantum computing has the power to transform nearly every sector and help us tackle the biggest problems of our time. This is why IBM continues to rapidly innovate quantum hardware and software design, building ways for quantum and classical workloads to empower each other, and create a global ecosystem that is imperative to the growth of a quantum industry.”

For more details on the unique IBM 127-quantum bit (qubit) ‘Eagle’ processor jump over to the official IBM website by following the link below.