Hyundai and Fox Marketing Cars have announced that they have teamed up to create what they claim to be the most powerful Street-focused Veloster Turbo ever built. The car will be on display at the 2013 SEMA show in Las Vegas kicking off November 5. The Veloster Turbo is powered by a 1.6-liter four-cylinder direct-injected turbocharged engine. 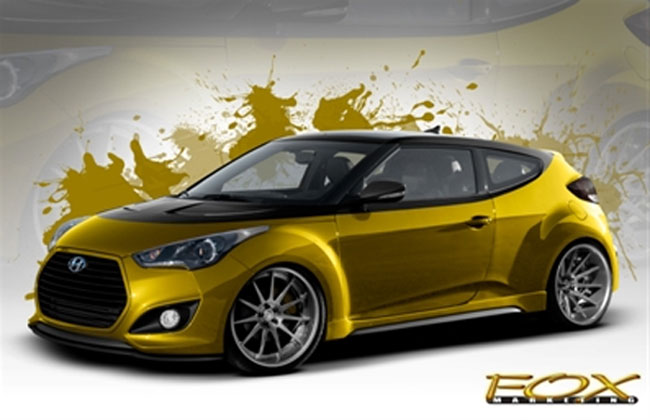 For the show car, that engine was significantly modified with a new 845 Motorsports Turbo upgrade, BorgWarner EFR Turbo, front-mounted intercooler, water/methanol injection system, and a custom ECU tune. The car runs on VP Racing 101 octane fuel. Modifications to the engine result in 370 hp.

The vehicle also has a number of handling improvements including a strut brace, chassis bracing, and fully adjustable ARK Performance coil-over suspension. Inside the car also gets special Street Pro LE seats and four-point harnesses. The car also has upgraded six-piston brakes in the front, custom wheels, and custom touches on the body kit. The car is painted in a custom mixed color called R-M Oynx HD Waterborne SkyAqua Pearl.