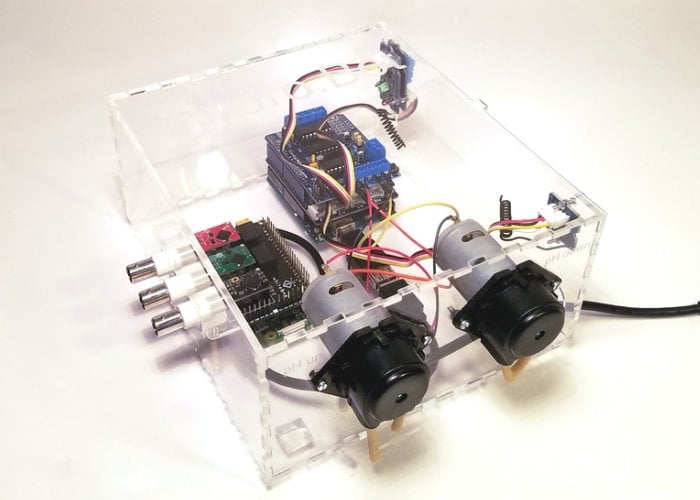 Using an Arduino Leonardo microcontroller and a Raspberry Pi Zero, Scott Paterson and Max Knight have developed an automated hydroponic system aptly named the HydroBot. Created to help grow fresh vegetables at an affordable price. HydroBot is the world’s first open source hydroponic automation system. Allowing you “to take the guesswork and hassle out of growing plants in water.

HydroBot will seamlessly work with any hydroponics, fogponics, or aeroponics system.” Watch the demonstration video below to learn more about the system which is launched via Kickstarter this week to raise the required funds needed to make the jump into production.

Earlybird pledges are available from $550 or roughly £447, which may seem a high price for a hydroponic system but its creators say that HydroBot can realistically pay for itself in under 6 months. While HydroBot is designed to be beginner-friendly, it’s also great fun for veteran hydroponic growers say the development team.

“Taking up less than 6 square feet can easily create over $100/month in value. In our example, we conservatively valued the harvest of leafy greens in one month at $1 per plant, in a system with 108 plant sites. With plants that take about a month to harvest, you are producing a value of $648 in 6 months. However, leafy greens can retail anywhere from $1 to $5 per head or pound. If we value those plants at $5 each, you are producing $3240 of value in a 6 month period. The reality lies somewhere between these estimates and can vary depending on what you grow. In this example we’re using leafy greens, but you can grow almost any kind of plants you want such as tomatoes, bell peppers, herbs, flowers, strawberries and a lot more! This investment not only benefits your wallet, but also the health of your family, your community and yourself.”