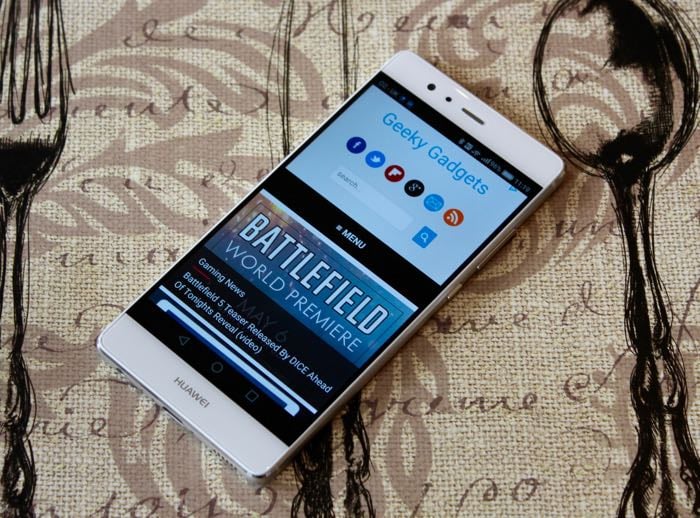 We have been testing out the new Huawei P9 for the last week so it is time for our Huawei P9 review, the device comes with a number of upgrades over last years P8, one if the major new features on the device is the camera.

The new P9 is equipped with a 5.2 inch IPS LCD display with a resolution of 1920 x 1080 pixels and the display comes with the latest Gorilla Glass 4. 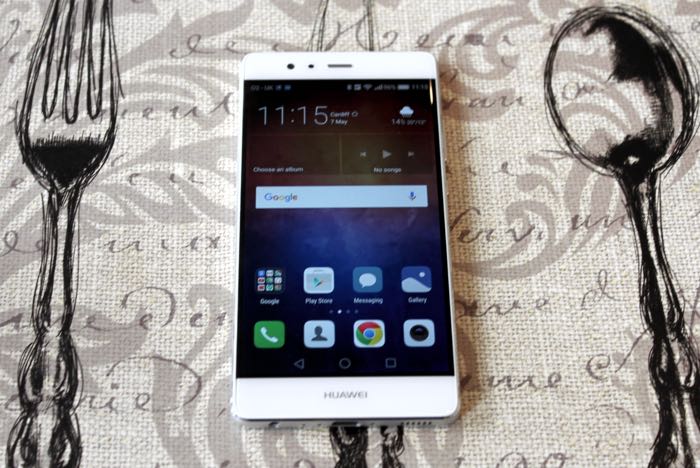 The P9 also comes with a 3000 mAh battery, dual band 802.11a/b/g/n/ac WiFi, Cat 6 LTE, NFC and Bluetooth 4.2 and it features three cameras, two on the front and two on the back. There is also a fingerprint sensor on the rear of the handset under the dual cameras. 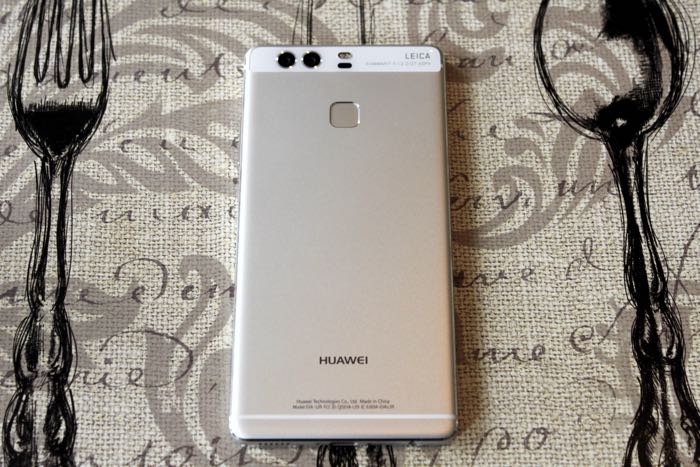 Up front there is an 8 megapixel camera for Selfies and video calls and on the back there are two 12 megapixel cameras, one is color, the other is monochrome. The device also comes with the latest USB Type C connector and Android 6.0 Marshmallow plus Huawei’s EMUI 4.1. You can see a list of the key specifications in the table below.

As we mentioned earlier the display on the Huawei P9 measures 5.2 inches and it is an IPS LCD display with a Full HD resolution of 1920 x 1080 pixels. 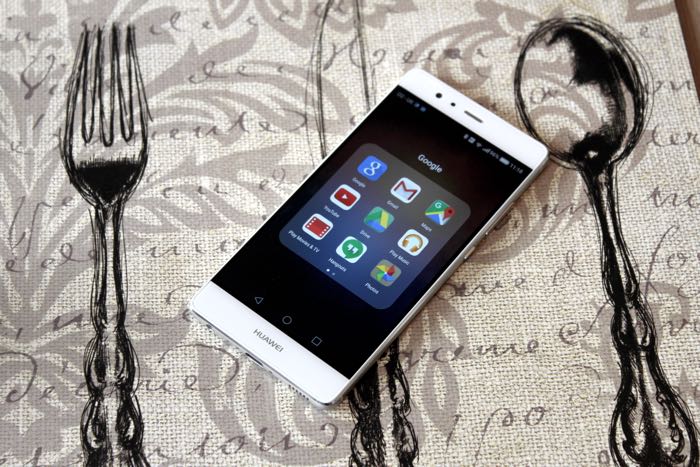 The display is decent with bright vivid colors and photos and video content look good , we would have liked to see a slightly higher resolution display on the device, as the 1080p display is the same as the P8 when many Android flagships are now shipping with QHD displays.

The P9 comes with a metal unibody design, the handset is slim and light and feels nice to use, it measures 5.7 inches by 2.8 inches by 0.28 inches thick and it weighs in at 144g. 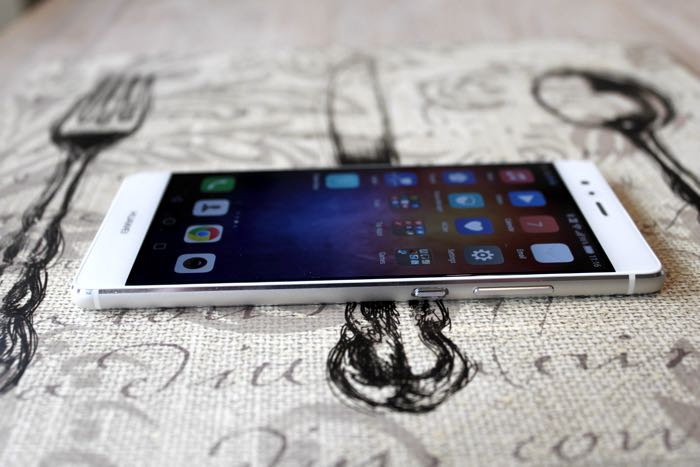 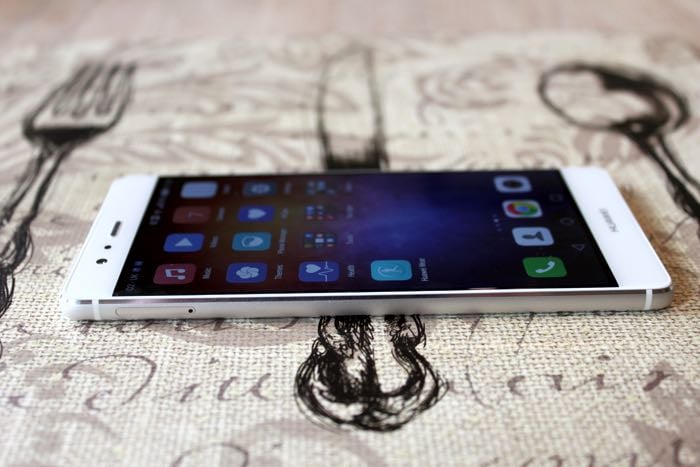 If you have used the Huawei P8 then you will recognize the design of the P9 as it has only had some minor upgrades over last years model, this includes the dual rear cameras and the fingerprint scanner. 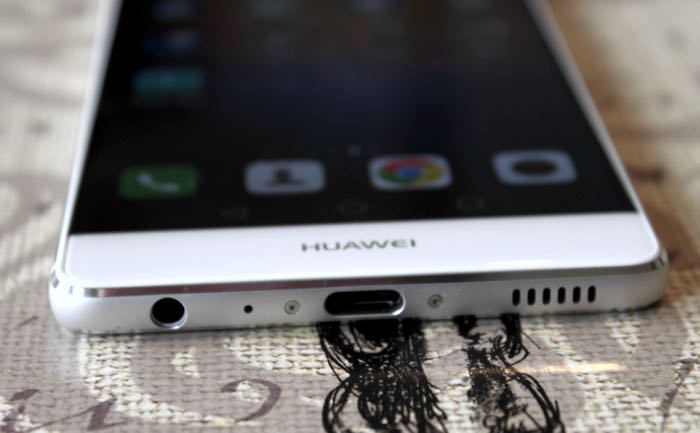 The P9 comes with the latest version of Android in the form of Android 6.0 it also has Huawei’s own customer user interface, Emotion UI 4.1, which has basically replaced the stock Android UI. 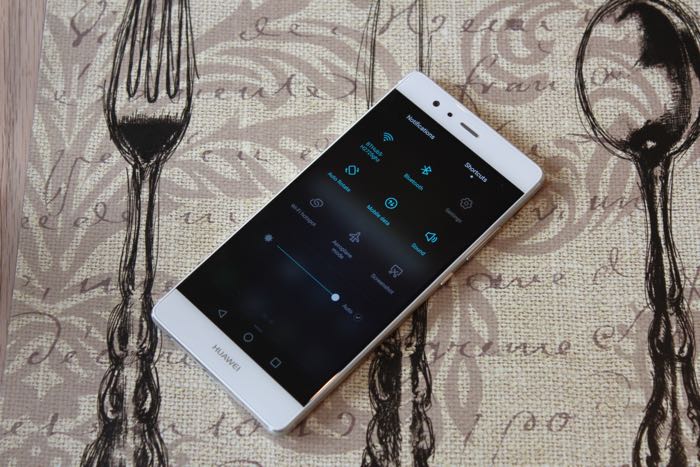 The Emotion UI 4.1 gives the handset a flat look with basic icons and it also comes with a range of apps installed like mail, messages, a gallery app, plus a range of other Huawei apps and some third party apps and games, The Huawei apps also including the company’s own fitness apps like Health and Huawei Wear which can be used with their fitness trackers. The UI can be easily customized with different themes, wallpapers and live wallpapers and more. 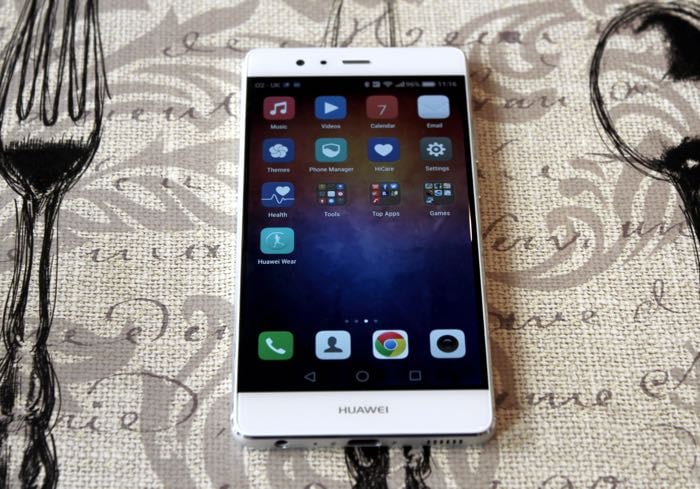 Overall the Huawei EMUI is pretty decent, it is not exactly stock Android but it is clean and easy to live with and a lot cleaner than some UIs from other manufacturers.

The P9 is equipped with an 3000 mAh battery which is designed to give you around a days worth of usage under normal conditions.

I have been using the handset all week for various tasks as my main smartphone and the battery performed well overall during the week, you will definitely get a days usage out of it under normal usage conditions. It is an improvement over the battery life on last years P8, although it could still do with some improvement as under heavy usage it may need to be charged more regularly. 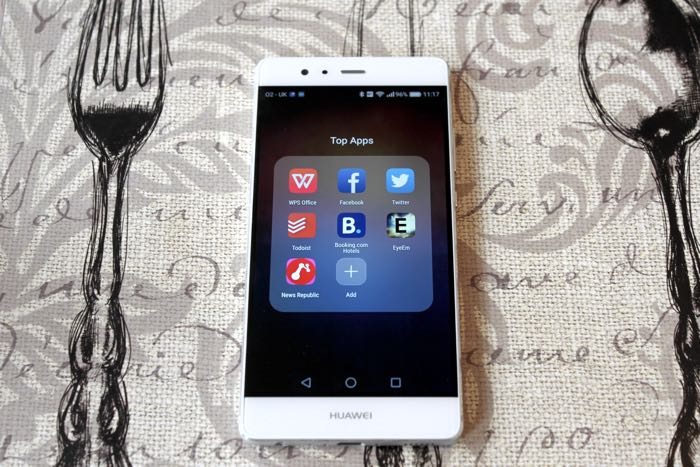 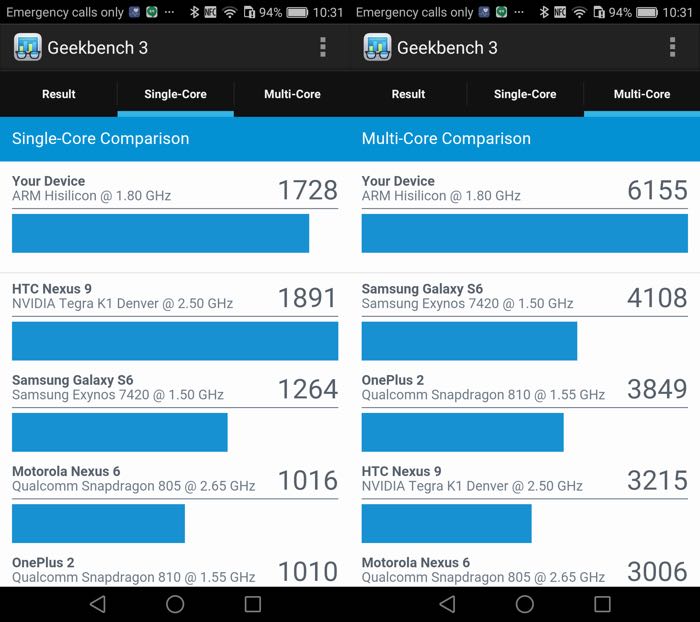 The performance of the handset with the Kirin 955 processor is impressive, it works very well with a wide range of games and feels fast, you can see some benchmarks that we ran on the handset with Geekbench 3 below. 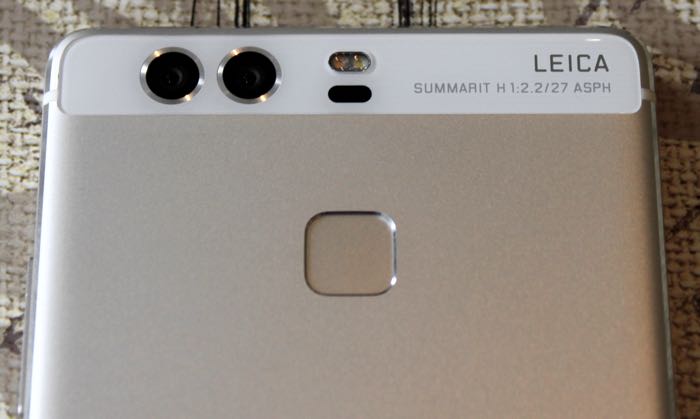 The handset is equipped with an 8 megapixel front facing camera which is designed for selfies and video calls and it does a good job on both, there is also a beauty slider feature when taking Selfies, unfortunately it was not able to make me look like Brad Pitt but it works quite well.

The rear camera is where the handset shines, on the back there are two twelve megapixel camera which have been developed in conjunction with Leica, the company worked with Leica on the camera software and the camera lenses. 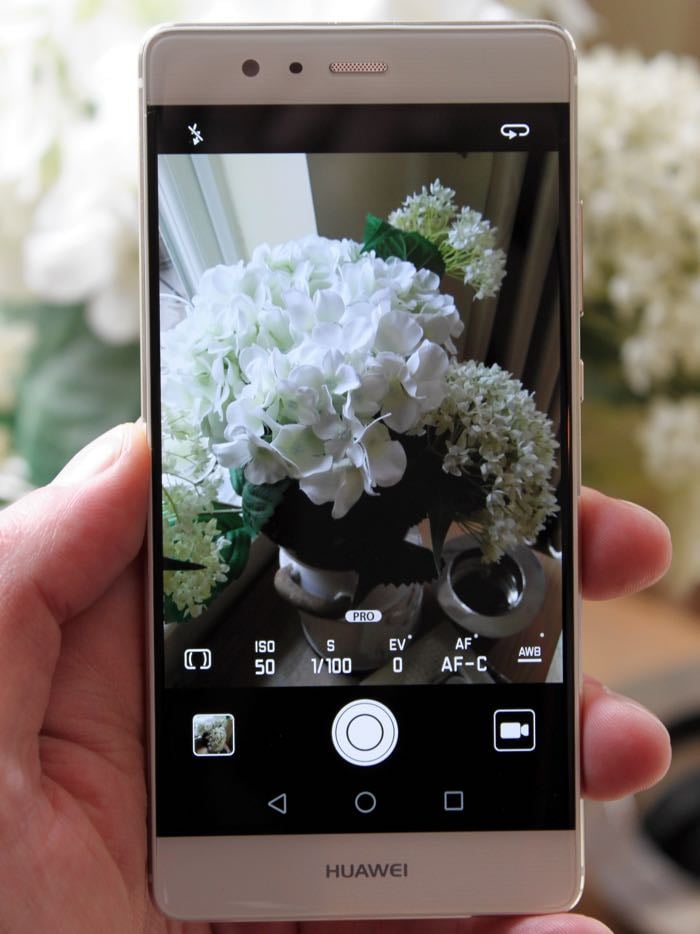 You get two 12 megapixel sensor, one is a color sensor the other is a monochrome sensor which allows you to take black and white shots, this works very well and produces some great photos as does the color camera.

The camera software is pretty good, it comes with an auto mode which takes some decent shots and there are also a number of other modes including a Pro mode which gives you a wide range of customization options, you can also shoot RAW images with the camera which is another useful feature. 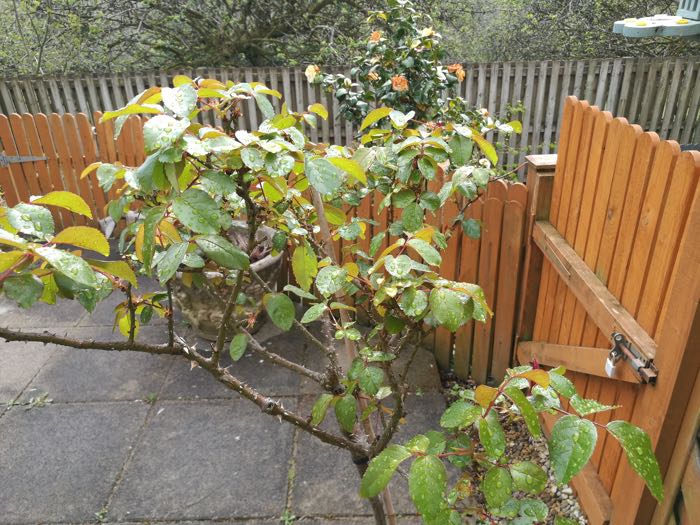 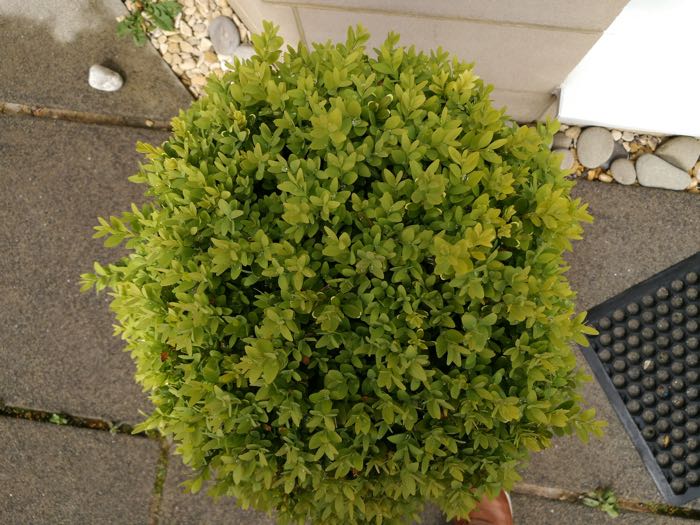 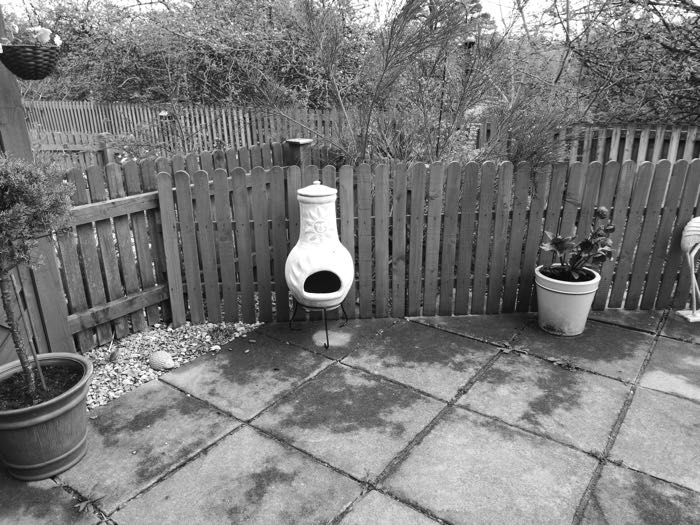 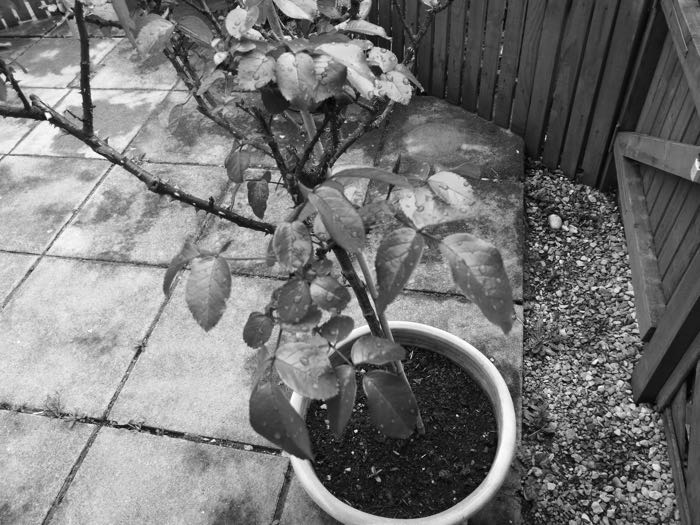 Overall Huawei have done a good job with the camera on their P9, it is one of the handset best features for taking photos, it is also capable or recording decent video in 1080p at 60 fps and 30fps, plus slow motion video in 720p at 120 frames per second.

The Huawei P9 costs £449 in the UK for the 32GB model, the handset is also available with all of the major carriers in the UK on contract, these include EE, Vodafone, Three and O2.

The P9 is a decent handset with some good features and a nice design, it is easy to use and the camera does a great job at taking photos and a decent job at recording video. The front camera is also very good for taking selfies.

The battery life on the handset is OK, giving you a full day of usage under normal conditions, this is one area where there is some room for improvement and we would have liked to see a longer lasting battery.

The display on the handset is crisp and clear, although the resolution is only Full HD instead of Quad HD like some of the handsets competitors, it is the company’s flagship device after all.

Overall you get a decent smartphone with fast performance, a decent display, an excellent camera and average battery life, you can find out more details about the new Huawei P9 over at Huawei at the link below.