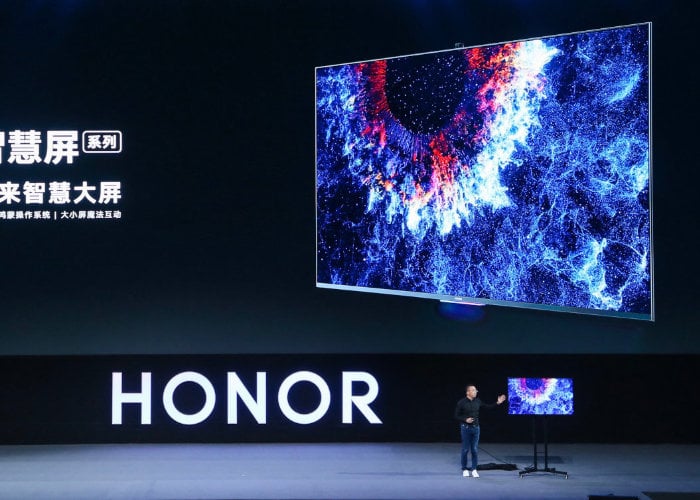 Huawei has unveiled its new Honor Vision smart TV this week providing a look at the first device equipped with Huawei’s Harmony OS offering an alternative to Google’s Android operating system. The Huawei Honor smart TV is equipped with a 55 inch screen offering users a resolution of 3840×2160 pixels (4K) and a 94 percent screen-to-body ratio.

The Honor Vision TV is powered by the new 28nm Hongjun 818 chipset, developed by Huawei’s HiSilicon in collaboration with Baidu. The chipset is optimized for outputting high-quality audio and video which is critical for the operation of a smart TV. It has 2 ARM Cortex A73 and 2 ARM Cortex A53 CPU cores, and a 4 core, 600MHz Mali-G51 GPU that supports H.265 4K video playback at up to 60fps and H.265 1080P video playback at up to 60 fps.

The display of the Honor smartTV supports 87 percent NTSC wide colour gamut, up to 400 nits of brightness, and 178 degree viewing angle. Honor describes the Harmony OS User interface as “magazine-style” and the system offers integrations with multiple local Chinese services and will serve as a hub for multi-device interactions when other Harmony OS devices are released.

The smart TV is also equipped with the built-in YoYo voice assistant allowing voice control and the ability to launch applications when required using your voice alone. The Honor Vision TV has a linear array with 6 microphones that support a 5-meter range to support the YoYo voice assistant.