We’ve heard a few times in the past that Huawei is working on the successor of its Huawei Ascend P6, dubbed as the Ascend P7. The handset has posed for the camera in the past, and is expected to launch in the coming months, possibly at the Mobile World Congress 2014 next week.

Recently, a press render of the alleged Huawei Ascend P7 surfaced from Weibo, a Chinese alternative to Twitter, showing the handset in four different colors :black, white, pink, and gold. 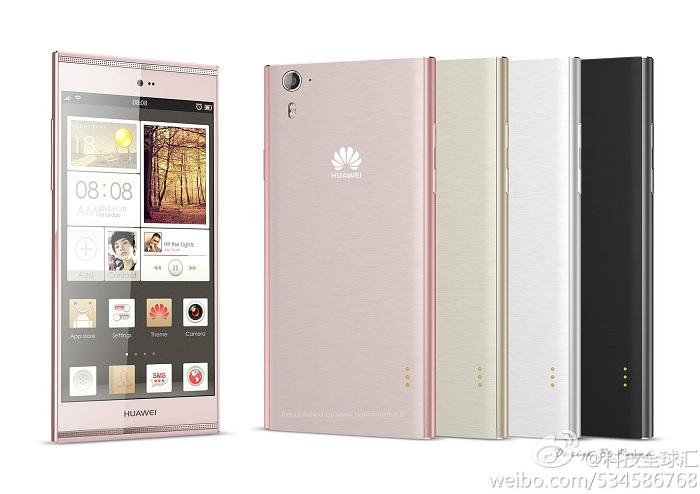 If it’s the real deal, the alleged handset carries a few traits of its predecessor as well. Regarding its specifications, Huawei Ascend P7 is rumored  to come with a 5-inch display boasting a resolution of 1920 x 1080 pixels, 2GB of RAM and will be powered by a quad-core a 1.6GHz HiSilicon chipset.

Other features include 16GB internal storage with a microSD card slot, 13 megapixel rear camera for photos and videos with a 8 megapixel front-facing camera, 2,460 mAh battery is expected to ship with Android OS, possibly KitKat, with Huawei’s Emotion UI 2.0 pre-installed out of the box.

There’s no official word about the launch of the alleged handset, but rumors suggest it will make its first official appearance at MWC 2014 next week, and we’ll make sure to bring you all the latest news from the event. Stay tuned.