Not too long ago, HTC M8 posed for the camera showing us the dual-camera sensors we’ve heard so much about, however, its legitimacy was questioned. Later, it was leaked again in black, showing the on-screen buttons of the handset.

The rumor mill hasn’t stop leaking information about the handset since it was spotted a few months back, and today is not any different. Recently, some images of the handset were leaked, giving us a glimpse of the dual-cameras on the back of the device with a dual-LED flash as well.. 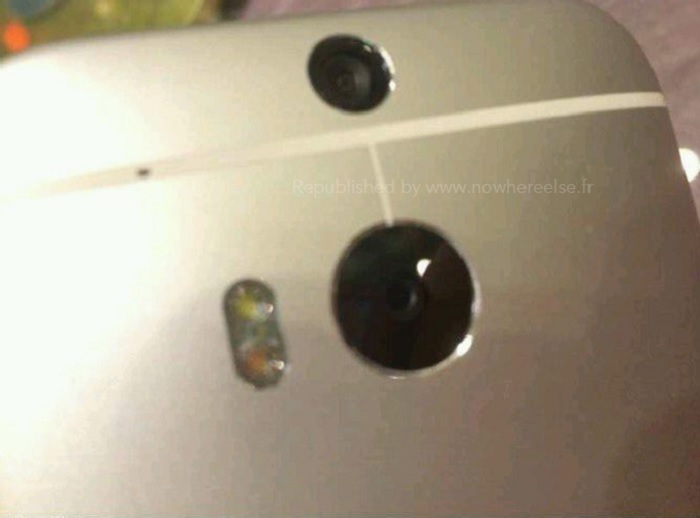 The handset is rumored to be strikingly similar to the HTC One, codenamed HTC M7, which was an amazing piece of hardware. Based on rumors, HTC M8 is rumored to come with a 5-inch display boasting a resolution of 1920 x 1080 pixels, a quad-core Snapdragon 800 chipset, or possibly the Snapdragon 805, with 2/3GB of RAM on-board. There’s also a possibility that we might witness a resolution of 2560 x 1440 pixels as future flagship devices are expected to come with 2K resolution.

Other features include 16GB expandable storage via microSD card slot and is expected to ship with Android 4.4 KitKat with Sense 6.0 UI pre-installed out of the box.

A rumor has it that HTC will unveil the highly rumored handset in March at a press event in New York City. Although there’s no official word from the Taiwanese OEM about any such event, and it’s recommended to take this with a grain of salt. Nothing is official until it comes from HTC.

We will update you if any such thing happens.