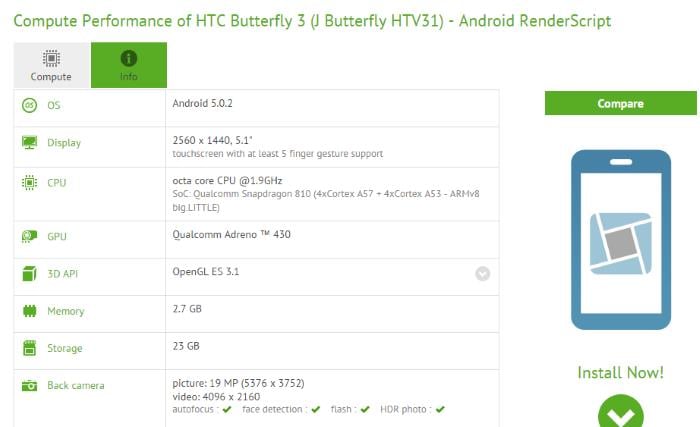 We’ve previously heard that HTC is reportedly working on a new Butterfly device which is expected to launch in Japan in the coming months.

Not too long ago, an alleged device dubbed as HTC Butterfly 3 and reveals the specifications it will bring at the table.

According to the benchmarking site, the alleged Butterfly 3 will reportedly come with a 5.1-inch display sporting a resolution of 2,560 by 1,440 pixels with a quad-core Snapdragon 810 processor, Adreno 430 GPU, 3GB of RAM and 32GB of internal storage.

The device apparently features a 20MP camera for photos and videos, possibly the same sensor found inside the HTC One M9 released a few weeks back. It doesn’t end there, the device also features an impressive 13MP front-facing camera for selfies. On top of it, the device is expected to ship with Android 5.0.2 Lollipop as its operating system out of the box.

This is a pretty high-end device, and features specifications which are even better than the HTC One M9, but it’s likely that it will be restricted to a specific region, possibly Japan. Rumors suggest HTC will unveil the device by the end of May.

There’s no word from HTC about it, but we’ll update you as soon as we get to hear anything about the launch of the device.