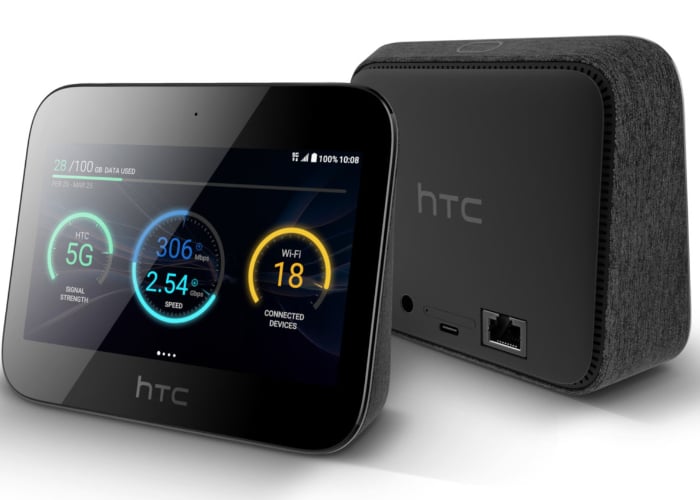 At MWC 2019 this week in Barcelona HTC has officially unveiled its new HTC 5G Hub which was first teased last year. Equipped with a 5 inch capacitive touchscreen display offering a resolution of 720 x 1280 pixels the 5G Hub is equipped with Bluetooth 5.0 connectivity as well as an internal rechargeable 7,660 mAh battery.  The 5G Hub also support wireless connectivity in the form of 802.11a/b/g/n/ac/ad WiFi standards and can accept up to 20 simultaneous connections from wireless devices.

Internally the 5G Hub is powered by a Qualcomm Snapdragon 855 processor and features a Snapdragon X50 5G modem supported by 4GB of RAM with 32GB of storage, and a microSD card reader with support for cards up to 512GB if more is required.

“Command the rapid speeds of the future with the HTC 5G Hub. Designed for ease of use in both home and office environments, this versatile device enables smooth 4K video streaming, low-latency gaming, and faster networks. With long-lasting power and Android 9 Pie support, the HTC 5G Hub is also made for a wide array of on-the-go situations, harnessing 5G speeds that are dramatically faster than 4G LTE networks.”

More details on the new HTC 5G Hub and full specifications jump over to the official HTC website by following the link below. The HTC 5G Hub will be available in select markets around the world during Q2 2019. In the United States as previously announced it will support Sprint’s new 5G network.