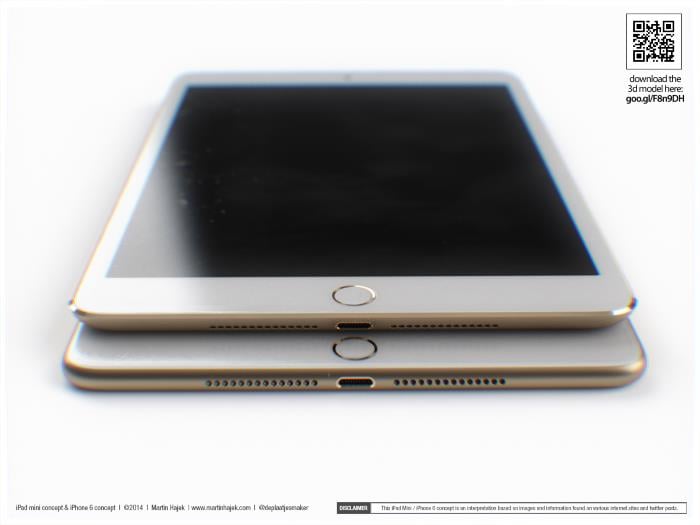 It’s not just the iPhone 6, the iPad line up is due for a refresh later this year as well, and we’ve seen a few rumors hinting at what we could expect from the upcoming tablets.

Apple is rumored to launch the updated iPad line up by the end of the year, which are said to come with a few design changes as well. Recently, the popular designer Martin Hajek created some iPad Mini 3 renders which features a soft, rounded edges — something similar to the rumored iPhone 6 — as well as a Touch ID sensor.

We haven’t seen many rumors or leaks related to the upcoming iPad Mini 3, but it seems the talented designer took some cues from the iPhone 6, and created what we’re seeing above. Personally, I like the round edges, they look more elegant in my opinion. He also posted some concept renders with the alleged iPhone 6 in them as well, and it looks brilliant.

Here are some more images:

The alleged iPad Mini 3 is said to feature the Touch ID sensor, as well as an upgraded processor with iOS 8 as its operating system. The rumor mill has been focusing more on the iPhone 6 lately, and they’ll be under the limelight until Apple officially announces the upcoming handset.

What do you think about these iPad Mini 3concept images? Share your thoughts using the comments below. You can also check out the complete gallery at the source link below.