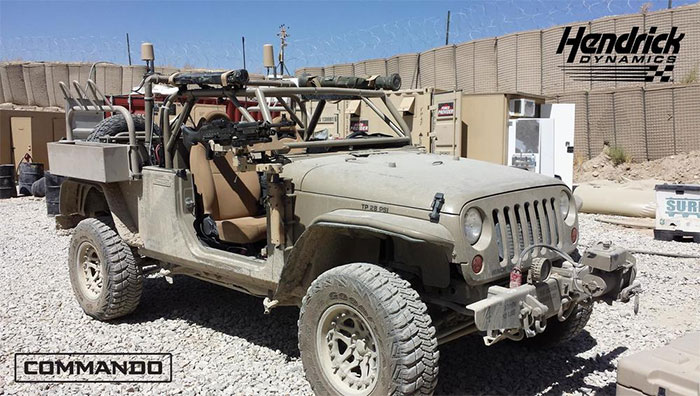 The US military has been looking to replace some of the vehicles that it puts soldiers in on the battlefield. The venerable HUMVEE has been replaced with a new vehicle coming online soon. A contractor called Hendrick Dynamics has an idea for a lightweight and affordable battlefield vehicle for special needs that is based on a Jeep Wrangler.

The prototype concept is called the Commando and while Jeeps are far from cheap for most of us, by military standards it would be inexpensive. If the military buys the Commando, it would put the Jeep back on the battlefield where the Willys MB started back in 1941.

Hendrick Dynamics has built about two dozen prototypes. The truck can run on diesel fuel like other military vehicles and a big benefit of the design is that parts are available all around the world. The Wrangler is a popular and capable vehicle right off the assembly line. The military hasn’t approved the vehicle yet, it seems the request for proposals for the vehicle are due by the end of the year. The Wrangler is one of the most popular Jeep models ever made with over 240,000 built last year by Fiat Chrysler.