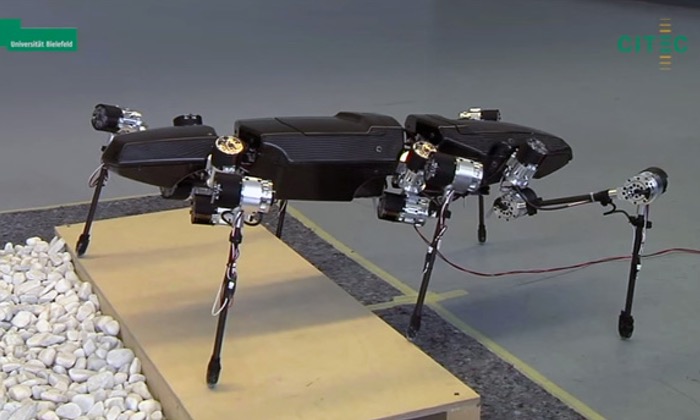 CITEC Bielefeld has this month unveiled a new style of walking robot called Hector that has been inspired by stick bugs, and is equipped with six thin legs to help it navigate a variety of different surfaces.

Hector is currently just a proof of concept prototype but its creators are already developing a new version that will be equipped with two cameras to provide sight to Hector as well as feelers allowing the robot to interact and virtually see its surrounding environment. Watch the video after the jump to learn more about the Hector walking robot project and see it in action.

The new technology installed within the Hector 6 legged robot allows each leg to move independently of the others as well as reacting to different to terrain types as it moves. Enabling it to maintain its balance even on uneven surfaces or slippery ground. Hector is capable of moving and positioning each leg individually to navigate small obstacles or step over uneven ground.

Unfortunately don’t expect the Hector walking robot to be available any time soon as the unveiled prototype is still in its very early stages of development. But it’s hoped this new robot will allow the creation of new technology for the construction of autonomous cargo orders as well as extra terrestrial rovers that can be sent out to our surrounding planets for exploration.