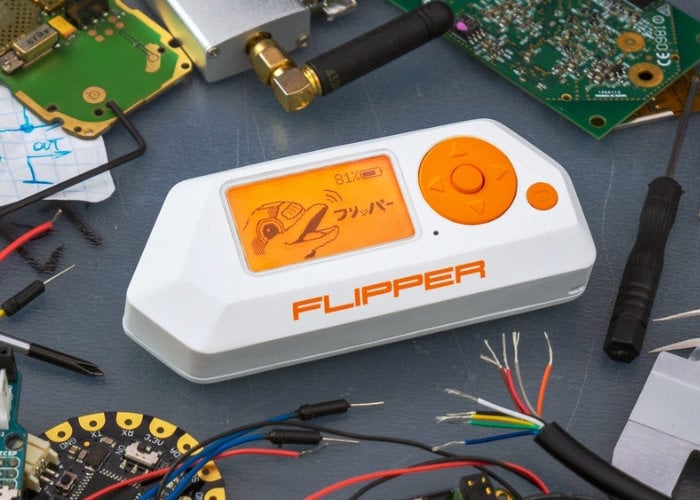 Flipper Zero is a portable multi-tool for pentesters and hardware geeks in a Tamagochi-like body. Launched via Kickstarter the  campaign has already raised over $3.4 milllion thanks to over 26,400 backers with still 10 days remaining. Flipper is made by makers who got tired of all these rough PCBs and bulky external modules. “We want to make a versatile and beautiful platform for prototyping, hardware research, and pentest of any kind”.

Earlybird pledges are available from $119 or roughly £91 offering a 30% saving off the recommended retail price. Flipper Zero is completely autonomous — it has a beefy battery, a handy 5-position directional pad, and a display. All the main functions and scripts are available from Flipper’s menu, no computer or smartphone required.

Flipper is equipped with the USB Type-C port for upgrading the firmware, deploying virtual serial port, and emulating HID input device. We have also decided to build in a cool old-school LCD screen, and not fancy TFT / IPS / OLED because it’s perfectly visible in sunlight and has an ultra-low 400nA power consumption with the backlight turned off, providing up to 7 days of battery life on a single charge.

“It loves to explore the digital world around: radio protocols, access control systems, hardware, and more. The main idea behind the Flipper Zero is to combine all the research & penetration hardware tools that you could need on the go in a single case. Out of the box, Flipper is filled with features and skills, but also It’s open-source and customizable, so you can extend its functionality in whatever way you like, along with the community.

“Flipper Zero is an electronic tool that has a curious character of a cyber dolphin who really loves to hack. The dolphin grows while you interact with digital systems in real life and he does it in his very own manner. Your actions will build his personality and he will always have fun and comment on them in his unique style.”