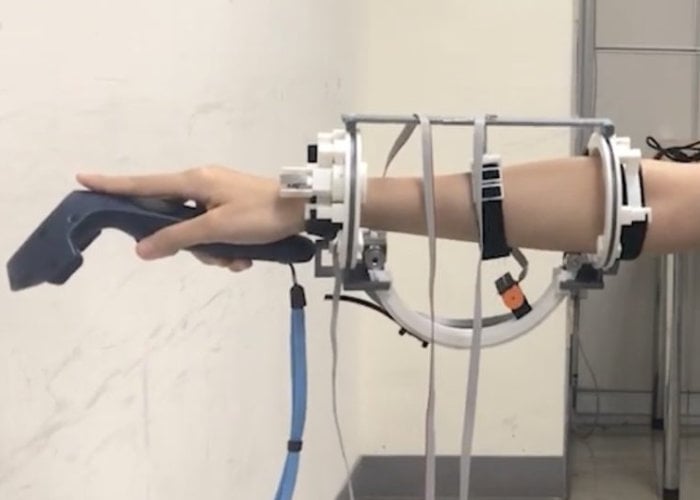 Using an Arduino Mega microcontroller together with some custom 3D printer parts and international team of researchers have developed a new concept called GuideBand, taking the form of an arm mounted device that physically guides players within VR.

“This device looks a bit like an external fixation apparatus for securing broken bones. It straps onto the user’s arm and has three motors controlled by an Arduino Mega via TB6612FNG motor drivers. The first motor moves the device’s gantry radially around the user’s arm. The second motor adjusts the angle of attack, offset perpendicularly from the forearm. The third motor acts as a winch and pulls a cable attached to a strap on the user’s arm.”

“The unique layout of GuideBand lets it impart the feeling of pulling onto the user’s forearm, like a parent tugging their child through a grocery store. That guidance could correspond directly to action in the virtual world, such as an NPC (Non-Player Character) pulling the player out of the way of danger. Or it can provide more subtle direction, like a game tutorial demonstrating how the player should move to interact with a virtual object.”

For more information on the GuideBand jump over to the research paper by following the link below.