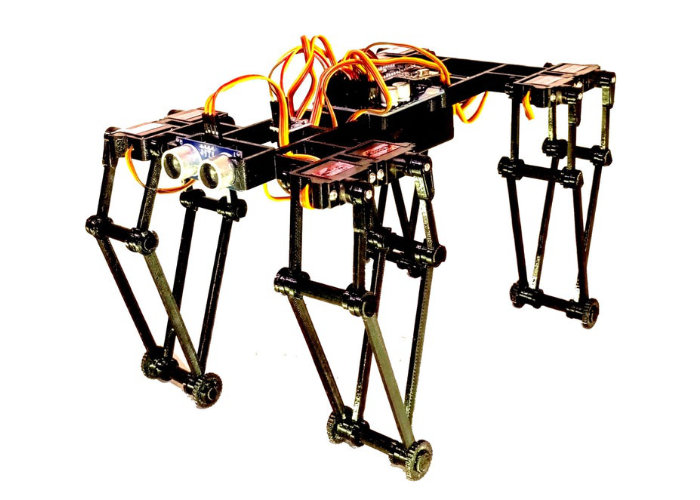 Instructables member Sebastian Coddington has created a racing quadruped robot using the power of Arduino. The race consists of a 10 m autonomous sprint and competitors can use quadruped or biped robot. The current record for a quadruped is 42 seconds for a 10 m sprint.

The GorillaBot design is based on a five bar linkage mechanism for each leg, 2 servos power each leg for a total of 8 servos. “Seeking a bit of inspiration from a fellow Instructables member “jegatheesan.soundarapandian” and last year’s winner of the Toulouse Robot Race “Oracid 1″ who both seem to love designing and sharing tutorials on how to build quadrupeds. I got started on basically copying there design and making it a bit bigger!”

“The rules state that apart from the start signal the whole race must be carried out by the robot autonomously so I had to come up with a light weight system to keep the robot on track in this case I used a QMC5883L Magnetometer (digital compass) so it could keep true to its orientation, a HC-SR04 Ultrasonic sensor in case the robot really messes up and starts hitting the wall at a 90 degree angle and I just used a step counter in the code to tell it how many steps it should do for 10 meters.”