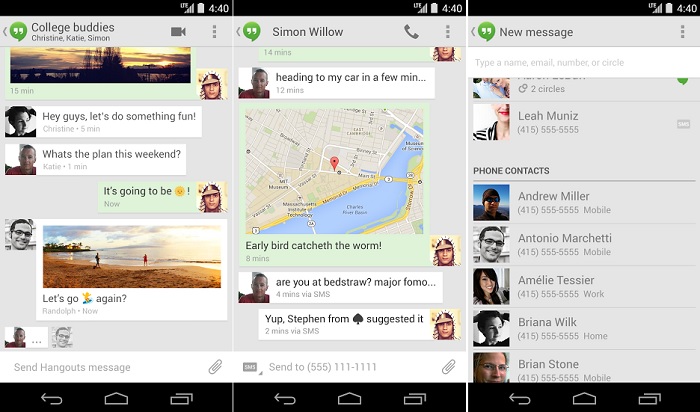 Google Hangouts is slowly becoming my regular messaging app on Android, not just for chat, but for the daily SMS needs as well since it can be used as the default one.

Recently, Google Hangouts picked up an update, bumping it to version 2.1. The latest update brings a number of new features and improvements to make sure the app works without any issues.

The latest update gives users the ability to set up custom ringtones and notifications for the app. This way, you can set up different notification sounds for different hangouts or people, so you know who has messaged you. The option resides in the People & Options menu for each Hangout — just open the hangout, press on the menu button and you’ll spot the option there.

The previous update for the app also brought some much needed features such as merged conversations, which merged the SMS and Hangouts conversation from the same recipient, along with a number of performance improvements and homescreen widget.

You should spot the update in the “My Apps” section in the Google Play store, but if you can’t, don’t worry since it can take a day or two for the update to reach all regions.

If you’re a regular users of Google Hangouts, head over to the Google Play Store and update the app to make sure you can try the new features.