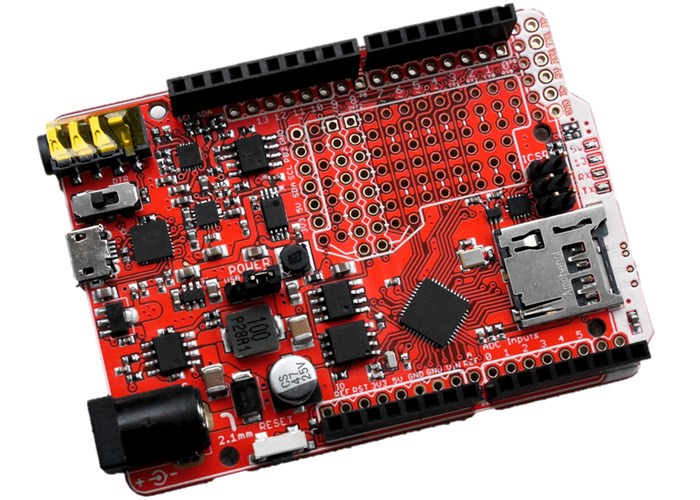 Phillip Stevens has created a new development board called the Goldilocks Analogue witch as the name suggests allows developers and managers to add analogue and audio to their Arduino projects.

The small add-on Goldilocks Analogue board is equipped with high-quality stereo DAC a headphone amplifier, Op Amp Outputs as well as a microphone and line inputs. Watch the video below to learn more about the new analogue board from its creator.

The goal of the Goldilocks Analogue is to bring a sophisticated analogue audio and process control input, output and storage capability to the Arduino environment.

Using the smartphone compatible 3.5mm socket, a microphone input and headphone outputs can connect your sounds into the Arduino world. Samples of sound can be played back from on-board SRAM, or recorded on to the EEPROM to be recovered later. Up to a minute of telephone quality audio can be stored (less for higher quality), or played back using the on-board storage. The MicroSD card can store and play back GBytes of audio if desired

The Goldilocks Analogue project is currently over on the Kickstarter crowd funding website looking to raise $8,000 in pledges to make the jump from concept to production.

So if you think Goldilocks Analogue is something you could benefit from, visit the Kickstarter website now to make a pledge and help Goldilocks Analogue become a reality. If you found this project interesting why not build your very own Arduino wind speed meter or anemometer to record the wind speed in your area.