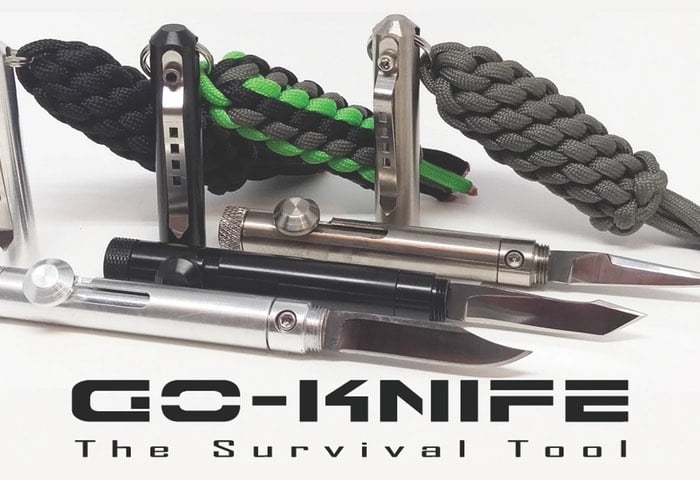 Nolan Brundige at NMB Creations has designed a compact survival tool called the Go-Knife, which features nine tools in one compact pocket -sized device, and builds on his previous designs.

Functions of the Go-Knife include a compass, firesteel, flare launcher, fish hook+line, knife, straw, firecord, and magnetised needle. Making sure you are capable of surviving and can possibly catch food, create fire and more if your skills will allow and the need arises.

Go-Knife has launched over on Kickstarter this month looking to raise $40,000 over the next 36 days, and thanks to over 80 backers is almost a quarter of the way there already. The latest Kickstarter campaign is the fourth by Nolan who explains more about his latest Go-Knife pocket survival gadget :

After many requests from previous backers, I have gone back to the drawing board and designed the ultimate compact survival tool, the Go-Knife. A complete 9-in-1 survival tool designed to fit anywhere with minimal weight. Also introducing the new Go-Bracelet, where survival meets fashion.

As a backpacker and novice survivalist the term “go-bag” is used quite frequently these days. This bag is filled with special tools and equipment that you rely on in an emergency or survival situation. What I have done is compacted some of these tools into one and made it something you can fit anywhere, thus the Go-Knife was born!

Pledges for the Go-Knife start at just $80 for early bird backers and Nolan expects to start shipping the devices during October 2016. If you are interested in helping the Go-Knife become a reality jump over to the Kickstarter website following the link below.