Gigabyte has announced that it has laid claim to a couple overclocking records in the computer geek community using its GA-Z77X-UD3H and GIGABYTE Z77X-UD5H main boards. The UD3H board was used to set the CPU speed overclocking record. 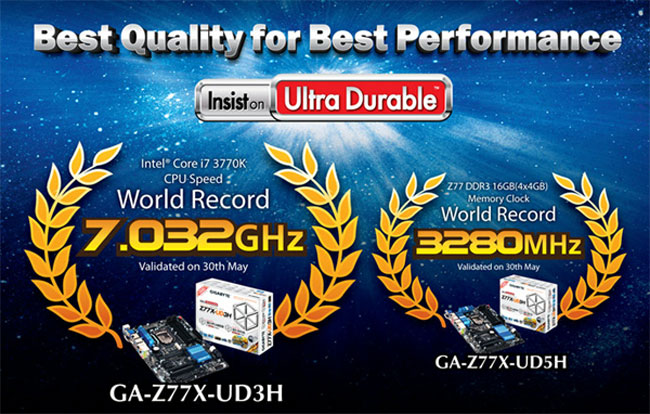 An overclocker going by HiCookie pushed the UD3H mainboard and an Intel Core i7 3770k CPU to a fully validated 7.03 GHz clock speed. That clock speed that required the use of liquid nitrogen to keep the processor cool. The same overclocker also broke the highest memory speed for an Intel Ivy Bridge platform.

That record toppled using the UD5H mainboard. The RAM was used in all four RAM slots on the mainboard and was G.Skill Trident X DDR3-2800, and reached 3280 MHz. “These new world records highlight our belief that top notch quality and design deliver truly world-class, record breaking performance,” commented Tim Handley, Deputy Director of Motherboard Marketing at GIGABYTE. “These new performance achievements come at a very opportune time as we prepare to introduce our next generation high-performance CPU power zone at Computex 2012, and we’re expecting even better results from motherboard models with this new feature!”