To celebrate it’s 50th anniversary in the US, Honda has created a giant version of their Asimo Robot. 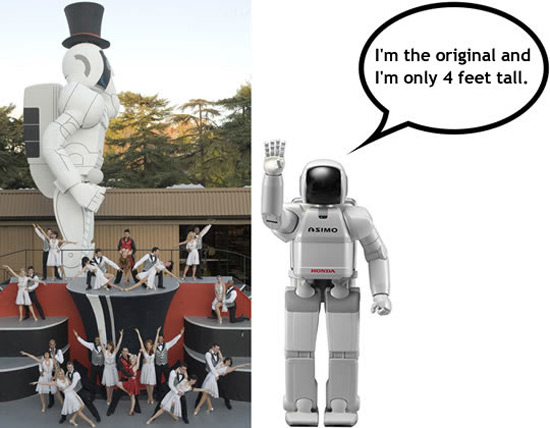 This giant Asimo robot, stands a massive 49 feet tall, which is 12 times the size of the original Asimo, and it will take centre stage on Honda’s float at the Rose Parade in Pasadena, California on January 1st 2009.

The Honda float includes a variety of flowers, plants and seeds that will later be ground up for mulch after the parade activities are concluded. The surface of ASIMO will be covered with super fine ground white rice and super fine ground everlasting; it is accented by fine cut blue statice and fine cut red statice as well as silverleaf to create accents and “shadows.” Fine cut everlasting, whole red carnations and white chrysanthemums will bring vivid color to Honda’s 50th anniversary logos, which will be decorated by Honda associates (employees) on December 27.

Head on over to Honda for more details on this giant Asimo robot.