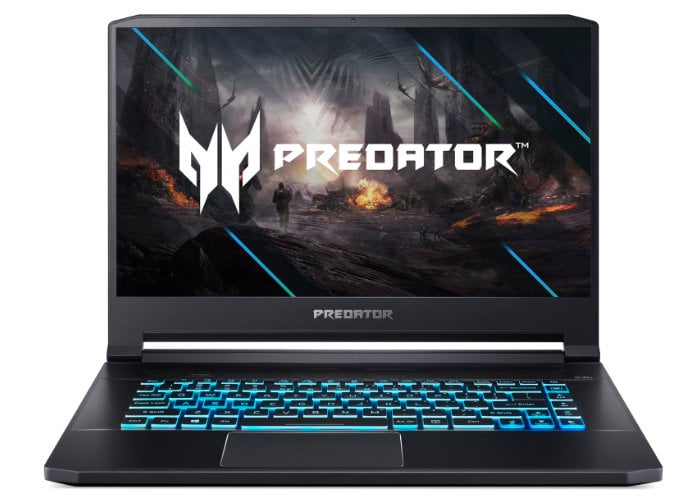 Acer has introduce their new powerful Predator Triton 500 laptop equipped with the latest 10th Gen Intel Core processors for high performance notebooks and up to NVIDIA GeForce RTX 2080 SUPER or 2070 SUPER GPUs with Max-Q Design. The Predator Triton 500 gaming notebook will be available in North America in May starting at from $2,200 and during May will be available in Europe and China from €1,899.

The Predator Triton 500 is also equipped with a battery capable of providing up to 7.5 hours of battery life and an industry-leading 300 Hz IPS panel with a 3 ms overdrive response time displays all the action in smooth and vivid detail, covering 100% of the sRGB color gamut while supporting wide-angle views. Together with support for NVIDIA G-Sync technology eliminating tearing and minimizes lag during gameplay.

“The Predator Triton 500 comes with a Killer Wi-Fi 6 AX1650i wireless controller, E3100G ethernet controller and Control Center 2.0 to push network connection quality up to new levels, ensuring speed-critical applications get bandwidth priority. All this power is packed into a thin 17.9 mm (0.7 in) and lightweight 2.1 kg (4.63 lb) all-metal chassis that features narrow bezels and an 81% screen-to-body ratio. The notebook has up to 32 GB of DDR4 memory and up to 2 TB of NVMe, RAID 0 SSD storage.”

“In addition to the latest processors and GPUs, we’ve made exciting across-the-board updates to the Predator Triton 500 and Acer Nitro 5 this year,” said James Lin, General Manager, Notebooks, IT Products Business, Acer. “Most importantly we’ve applied new thermal technology which keeps the devices cool so gamers can enjoy the performance improvements from the latest silicon technology.”

Features of the new Acer Predator Triton 500 with Intel Core H-Series processors include :

– The new Predator Triton 500 and Nitro 5 both feature the new 10th Gen Intel Core processor, the latest NVIDIA GeForce RTX SUPER and GTX GPUs, and fast display refresh rates of up to 300 Hz on the Triton 500 and up to 144 Hz[1] on the Nitro 5, both with only 3 ms latency
– The Predator Triton 500 is a powerful gaming notebook that cuts no corners, perfect for those who stream or need to edit and render videos while on the go
– The Acer Nitro 5 proves gaming notebooks don’t need to break the bank, and is packed with the power players need to get into the game