One Ebay seller decided they would have a bit of fun and post a haunted iPhone for sale. 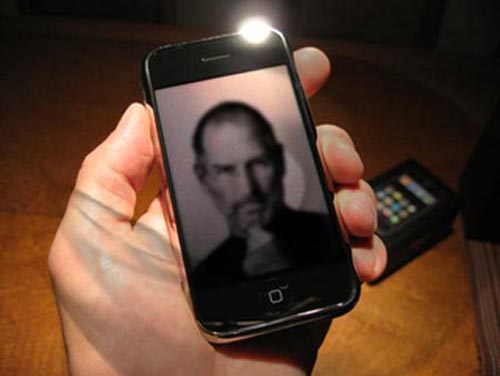 Unfortunately the listing has now been removed, here’s the details in case your interested.

When I opened the package.
The phone was on.
There were no cute buttons, no touch screen. (NEVER touch the screen, Ill tell you why later on.)
Instead, there was a blurry image of Steve Jobs burned into it. At first I didnt recognize it at all, my brother told me he was sure it was Steve Jobs. We looked through some pictures online and we are pretty sure the image is that of Steve Jobs.
I tried to rub it off thinking it was a joke, but the screen was SUPER HOT. I pretty much burned my fingers and as I type this, the middle and ring fingers on my right hand barely feel the keys on this keyboard. Never ever touch the screen of this ipod. The sides are cool room temperature, but the screen is intensely hot.
The image doesnt move, its burned on so its not on the LCD. The LCD doesnt even turn on. However the sound does work, and occasionally (ussually when someone is looking at it or talking about it, but it might be a coincidence)
The iPhone chuckles, loudly!
Steve Jobs just laughs at me. Over and over and over. Ive had it for a day and it hasnt run out of batteries. The sound still works. It laughs while I sleep. It laughs at me in the car. At work. Everywhere.
I was going to return it, but maybe someone is interested in this haunted piece of technology.

via SlashGear and Geekologie