The new fully automatic Electromagnetic Pulse rifle is not the first Jason has created and follows on from the single shot coil gun he created a few years ago. 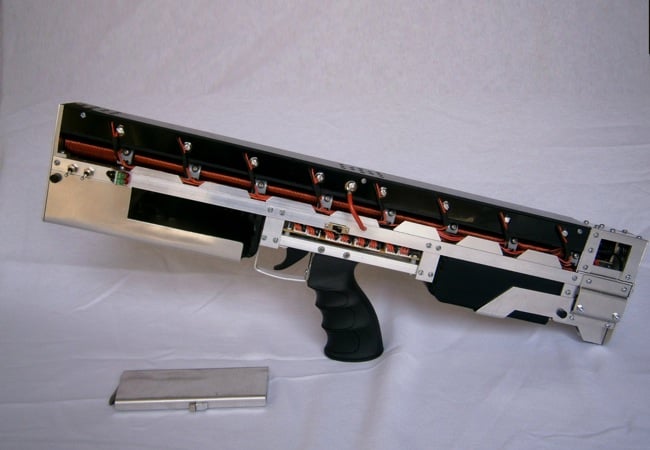 The new creation is equipped with a barrel full of electromagnets that systematically switch on one after the other to fling magnetic steel bolts out of the non-magnetic aluminium barrel. Watch the video below to learn more about the Fully Automatic Electromagnetic Pulse Rifle project and see it in action.

“The full-auto coilgun project started in November 2010, and the initial design was a high-voltage, single stage, capacitor driven coilgun I called the CG-41. I hoped to achieve a muzzle energy of about 7.5 Joules with a Rate of Fire (ROF) of 4 Rounds Per Second (RPS). However, the design disintegrated around the charging circuit, which was a monstrous 2.5kW DC-AC inverter meant to power appliances from a car battery.

The inverter was gigantic, heavy, and had a number of electrical issues that prevented it from being readily integrated into the coilgun design. As the design exploded in size and complexity to accommodate the charging circuit while still failing to work properly, it had to be abandoned during the testing phase in June 2011.”

For more information on the new Fully Automatic Electromagnetic Pulse Rifle jump over to the Delta V Engineering website for details.