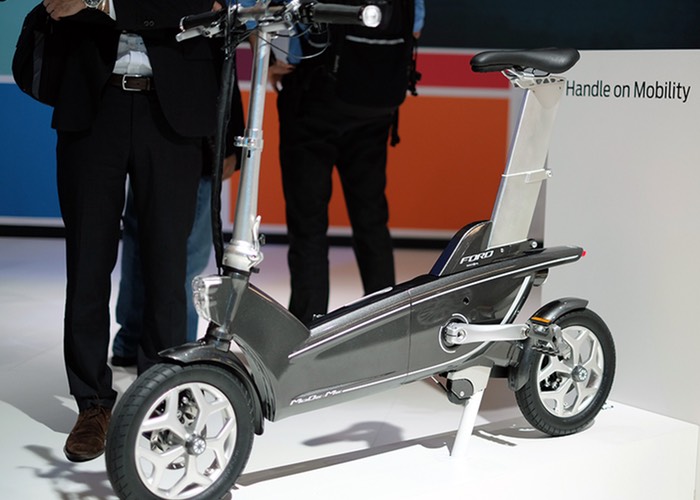 Following on from the recent announcement by Ford during this years CES 2015 Consumer Electronics Show in Las Vegas in Jnauary when Ford revealed its new Smart Mobility Plan.

Ford has this week unveiled two new Ford folding concept e-bikes during MWC 2015 in Barcelona that take the form of e-bikes called the MoDe:Pro and the MoDe:Me that are equipped with a number of interesting features as well as the ability to connect to the Apple’s new iPhone 6 smartphones.

The Ford e-bikes were designed as part of a company wide challenge launched by Ford asking Ford employees and designers to come up with designs for the new smart e-bike range with the winning designs being created by Ford designers Paul Wraith and Bruce Southey.

Features of the e-bikes include sensors that allow riders to be alerted when a vehicle is coming up too fast behind them. Triggering vibrations allowing the rider to make adjustments as well as flashing lights to warn the approaching driver of the cyclist.

The handlebars of the new Ford e-Bikes are equipped with haptic feedback and can be linked to GPS software enabling the bike to guide the rider by providing feedback to indicate when to turn right or left through the handgrips.

Unfortunately the Ford e-bikes are currently just concepts to showcase the innovation that Ford is capable of, and no plans at the current time have been announced by Ford to take them through to production models for consumers to purchase. But as always when any more information is made available we will keep you updated as always.