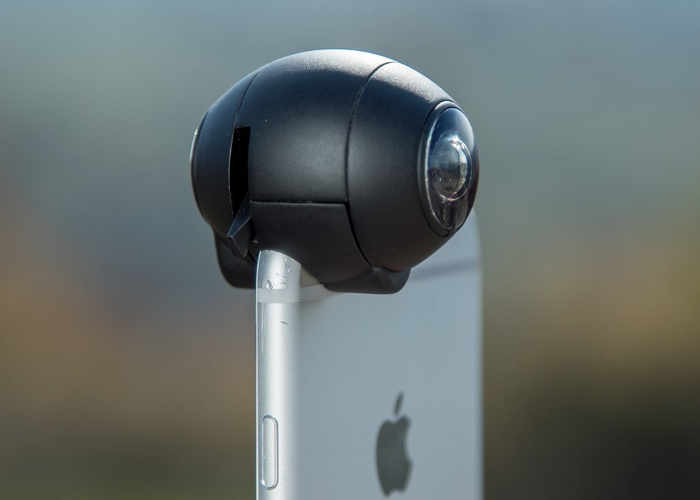 Smartphone photographers searching for a quick and easy way to capture 360 video footage and imagery, may be interested in a new smartphone camera lens which is being created called the Fishball. The 360 camera lens requires no charging or cables and simply clips over the existing lenses of your smartphone to provide an easy way to capture virtual reality footage. Watch the demonstration video below to learn more about this handy smartphone camera lens adapter which is launched by Indiegogo to raise the $50,000 it requires to make the jump into production.

The Fishball team based in San Francisco, California explain more about their new smartphone 360 camera lens which is now available to back via Indiegogo with pledges starting from $59 and shipping expected to take place during June 2018.

Fishball is a clip-on lens attachment that turns your iPhone into a 360° photo and video camera. It leverages optics, not electronics, making it the simplest and easiest way to enjoy the benefits of 360° VR. It all started when three friends and classmates wanted a simple way to capture 360° photo and video, without extra hassle and without breaking the bank.
That solution didn’t exist. So, they created Fishball.

Fishball is the only device of its kind that lets you capture in full 360 degrees, using your phone’s powerful rear camera. It’s ultra-portable and super simple to use. If you can record with a phone, you can record with Fishball. Best of all, it uses special optics, not electronics, so there’s nothing to charge, no memory cards to buy, and no wireless pairing required. Just clip it on and shoot.

Fishball’s proprietary lens system utilizes your iPhone’s existing camera to capture every angle and every detail of your moments. And since everything is captured directly on your phone and not on a separate memory card, you can instantly share to platforms such as Facebook, Twitter, YouTube, Vimeo—basically any platform that hosts 360° images and videos.

More information and to make a pledge to be one of the first to own a Fishball jump over to the official Indiegogo campaign page by following the link below.