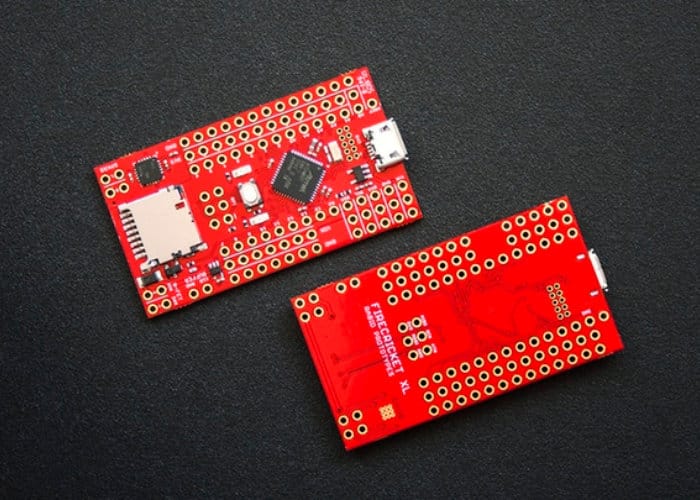 Rabid Prototypes has once again taken to Kickstarter to raise the required funds to take its new Firecricket XL open source 32-bit Arduino compatible development board into production. Designed with the aim of bringing costume props and toys to life, the new development board offers light, sound and motion control that is easy to program yourself.

The Firecricket XL features a 48MHz 32-bit ARM Cortex M0+ microcontroller w/ 32K of RAM, a MicroSD slot allowing you to store sound effects, bitmaps, and configuration files, a 2W stereo audio amplifier, and an N-FET w/ flyback diode for driving high current inductive loads, like vibration motors or high power LEDs, and a 5V logic buffer for controlling strings of WS2812 Neopixel LEDs. Watch the demonstration video below to learn more about its features and functionality and what can be accomplished with a little programming.

“The Firecricket XL is designed to add light, sound, and motion to replica props from your favorite movies, video games, TV shows, and comics. It’s a must have for any cosplayer or anyone who wants to add some extra flair to their Halloween costume or decorations! Use it to add lights and sounds to a toy car or space ship. Or, make a favorite stuffed animal talk and “purr” with a vibration motor. Or, place it in a chest with a limit switch on the lid and a high power LED and have it play the fanfare from the Legend of Zelda whenever it’s opened. The only limit is your imagination. The possibilities are endless!”

For full specifications and all available pledges which start from $35 or £26, jump over to the official crowdfunding campaign page by following the link below. If all goes well worldwide shipping is expected to start in a couple of months time during July 2018.