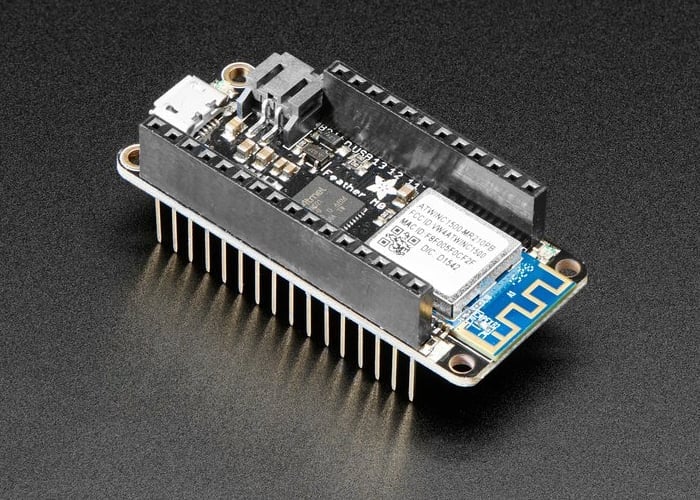 Electronic enthusiasts, coders and hobbyists that use the range of Feather development boards created by Adafruit. You might be interested to know that the company is now supplying a fully assembled Feather M0 WiFi with Stacking Headers priced at $37.95

To recap the specifications of the small Feather M0 WiFi development board include a Cortex M0+ processor with ton more I/O pins, lots of 12-bit ADCs, a 10-bit DAC, 6 total SERCOMs that can each do SPI, I2C or UART (3 are used by the existing interfaces, leaving you 3), plenty of timers, PWMs, DMA, native USB, and more. More detailed jump over to the official Adafruit online store by following the link below.

Other features of the Feather M0 WiFi include :

– The ATWINC has much lower power usage, about 12mA for the WINC & 10mA for the ATSAMD21 with auto-powermanagement on for the WiFi and no power management for the ARM. With manual power management, you can get the WiFi module to down to ~2mA by putting it to sleep.
– This is compared to the ESP’s ~70mA average current draw, and whose deep sleep mode requires a WDT reset.
– We also found that we could stream more reliably (less ‘bursty’) with the ATWINC, although altogether the ESP has higher throughput.
– You also dont have to ‘yield’ all the time to the WiFi core, since its a separate chip. You get full reign of the processor and timing