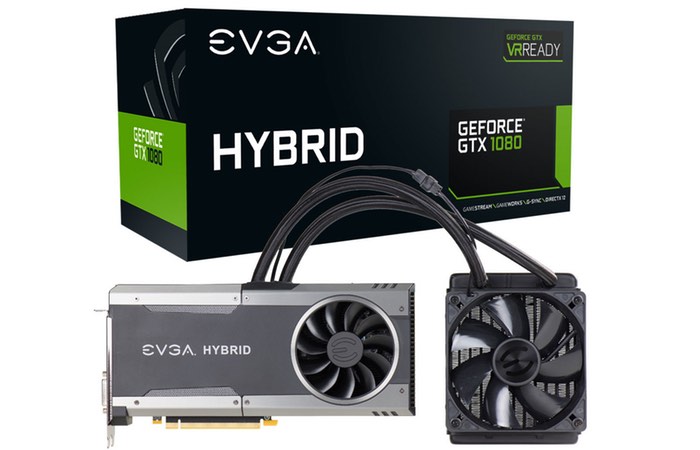 EVGA has today unveiled a new addition to their range of hybrid graphics cards with the launch of the new GeForce GTX 1080 HYBRID which will soon be available priced at $730.

The customised card is roughly $130 more expensive than the standard off the shelf GTX 1080 and has been created to provide an easy way to install a closed-loop liquid cooling solution graphics card into your gaming system.

As you can see from the image above the system is also equipped with a small air cooling system thanks to the conventional 100 mm fan on the liquid reservoir, and the graphic card is factory overclocked, but kept cool thanks to a base-plate cooling the memory and VRM. Tech Power Up explains more about the new GeForce GTX 1080 HYBRID graphics cards features :

The underlying PCB is identical to that of the GTX 1080 Classified ACX 3.0 by EVGA. The card also offers the same factory-overclock as the Classified, with 1721 MHz core, 1860 MHz GPU Boost, and an untouched 10 GHz (GDDR5X-effective) memory. The card draws power from a pair of 8-pin PCIe power connectors, its display outputs include one each of HDMI 2.0b, dual-link DVI, and three DisplayPort 1.4 connectors. EVGA is giving away $115 worth in-game credit with Epic Games’ upcoming MOBA title “Paragon” with this card.