Evernote has rolled out a new update to their Mac, iOS and Web applications which brings with it a number of new features and tweaks, one of which now allows you to set customised reminders. Which has been the most request new feature to be added in Evernote by its users.

Now within the Evernote app you can add a Reminder to a note by simply tapping on the alarm clock icon located at the top of the note on Mac and Web, and at the bottom of the note on iPhone and iPad. Watch the video after the jump to see it in action. 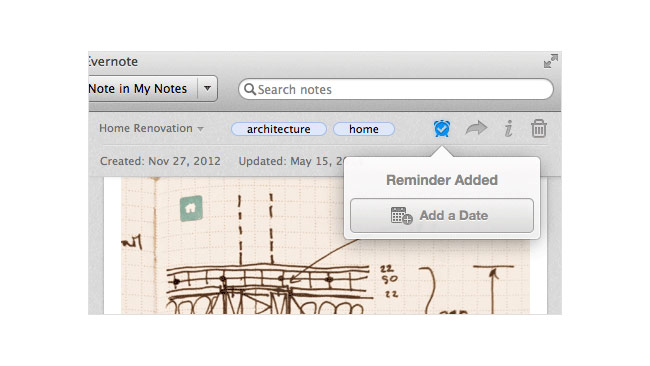 Evernote Reminders will also synchronise across all versions of the Evernote application that support the new feature, and currently includes the already mentioned Mac, iOS and Web.

“You’ll get an in-app alarm and, optionally, an email the day that a Reminder is due. Once set, you’ll see the note title appear in the new Reminder section at the top of the note list. You can change the order of Reminders simply by dragging them around. When you complete your task, tap on the check or, on iOS, swipe to remove the Reminder from the list.”

The latest Evernote app for iOS is now available to download from the iTunes App Store for free.